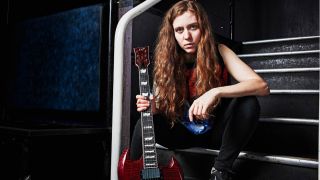 There’s a well of unimaginable darkness and intensity driving Code Orange’s latest album Underneath. So much so, that it feels almost more soundtrack than metal – adding digital squelches and heavily-effected samples to the nightmarish onslaught of chainsaw guitars and crushing beatdowns.

The Pittsburgh noise merchants, who won a Grammy nomination on their last album, 2017’s Forever, now stand as one of the most important extreme bands of the last decade. Speaking to TG in the cafeteria of a London hotel, guitarist Reba Meyers explains the secrets to their devastating sound, and how employing hip-hop sampling techniques helped them make heavy metal even heavier...

Since your last TG interview, you released the LTD RM-600 with ESP. What were you looking for in your very first signature guitar?

“Honestly, I was surprised when they first asked me! I really didn’t expect it. I’ve always been an ESP player... That’s just been me my whole life, ever since I started playing metal guitar. Tony [Rauser], who is the Artist Rep, came to some of our shows and we became friends, then ended up asking me.

"There was no masterplan per se, but sometimes that’s better. A lot of times, if you take too long and sulk and sit on things – even songs and riffs – it starts getting too convoluted. An idea that pops into your head out of nowhere can be so much better.”

“It’s just classic. I’ve always experimented with different things but you can’t really go wrong with that one, whoever buys this guitar will be in love with the sound of that pickup. It’s perfect for this style of music. I was so happy with how it came out, I didn’t expect it to be so perfect but they got everything right, including the weights.

“I wanted to make it heavier at first because I was so used to my old LTD from the early 2000s, so they worked with me on that. Then they had the factory figure out a way to do the finish with saran wrap, using this special technique they hadn’t done before. They went pretty hard on it! I was proud and very pleased.”

It also made history as ESP’s first signature guitar for a female musician...

“I’m sure there’s a lot of women out there that can shred a lot harder than I do! I hope this inspires other guitarists who are confident in how they play, even if it isn’t the usual demo shredding guitar style. There’s a lot of that and it’s cool, but that’s not why I love guitar.

“I’m glad I can represent not only female guitarists, but also any guitar player who isn’t the same as the rest of the roster. I feel like I come from a diff erent side of things. When you’re born into punk music, you don’t play the typical way. I’m self-taught; I learned how to play based on who I saw in my city. Nowadays, everyone can look on YouTube, but growing up, it was more about taking little pieces from other musicians in Pittsburgh and my friends. It’s that more unique, self-taught style”

What felt different about the writing and recording process for Underneath?

“We’ve been taking a lot of influence from modern rap, which people dog on in the metal community sometimes. But there’s a production style and freedom in current rap artists that we find admirable. I’ve watched a lot of interviews with Mike Dean, who is a producer for Kanye and others, where he talks a lot about using different software for guitars and how he creates ideas and makes beats.

“It’s very inspiring. He came from a classical background, it seemed, playing saxophone – which I really related to because that’s the world I came from. It made me realise I could connect my knowledge of chord progressions and music theory to the band, even though it’s not something you might expect. Whenever I think about who it should sound like, the answer is always the deepest version of Code Orange. I didn’t want it to sound like this band mixed with that band. It had to sound like us.”

There’s almost a mechanical sense to a lot of the guitars, like they’ve been chopped to the extreme...

“There’s a song called You And You Alone which really went far with that approach. I wrote a bunch of stuff quickly and demoed it out with programmed drums. It was a messy thing with a chorus in between, me and Jami (Morgan, drummer) thought Shade (guitarist/vocalist Eric ‘Shade’ Balderose) could do something insane, so he chopped it up into some electronic version of itself.

“I had to go back and relearn how to actually play it. There was a lot of that on this album, ideas that got screwed up and relearned, which then created another style and feeling to it. I was able to go so much further than I expected myself to using all the digital and analogue mixed together. The line between electronics and guitars is fine – we have a core guitar sound but it gets blurry in the other bleed-noise sections. You don’t really know which is which.

“Sometimes computers have an unnatural feel, so our approach was to make something electronic starting with a guitar riff . It’s a human playing with hands, it might be a bit messier but it creates a tenseness and realness that’s really important to our band and why people like us. It’s a perfect situation, no-one is trying to turn down, it’s three people who really understand guitars chopping riffs and sending them back and forth.”

A guide to Reba’s gear on Underneath...

• ESP Custom Viper
“They recently gave me a Custom Shop cherry red Viper which is just perfect for our sound. For some reason, I play my best on that guitar and I can’t explain why. There are some Gibsons to thicken out the choruses, but for the most I was just using that one Custom shop."

• EVH 5150 III
“I hadn’t used this amp much before; it caught me by surprise! The EVH didn’t need any extra tweaking or gain, it was perfectly cutting and smooth – present but not in a crunchy way, which tends to be the battle I’m always having!”

• Soundtoys plugins
“What made this album different was how we used plug-ins and pedals in conjunction. I used the PhaseMistress, FilterFreak and Decapitator on my guitars.”

That makes for some really unusual time changes and pushes with your riffs...

“Yeah, as well as the Pittsburgh beatdown-style bands who introduced us to that. That’s where we got the influence for super heavy time-switching riff s. It’s kinda ingrained into us. People might look at it really technically and say it’s a bar of four, then five and then seven.

“I never think about that until much later, just so I know what’s going on. That’s all by ear. If you have an understanding of where the beat needs to fall and where it can feel cool when it’s in the ‘wrong’ place, it happens on the fly. If you took a part like that and lined it all up perfectly, it wouldn’t sound good. You need a feel for those kinds of parts.”

It’s an unusual dynamic you have between you and the band’s other two guitarists, Shade and Dominic Landolina. What have you learned to watch out for with three guitars on stage?

“Tuning is the main issue, if I’m being honest. I’m constantly being a stickler about that. My bandmates know what kind of look I give them when something’s wrong. When you’re playing in drop A or B, if you hit the strings too hard it’s gonna sound like shit because you’ll go out of tune. That’s a constant issue for a band with three guitar players.

“Other than that, it’s making sure we’re not all playing when we don’t need to be. Having three guitarists is a necessity for us, especially on this record – there’s an insane amount of stuff going on, it’s really dense. We need to keep the most important facet played live, I don’t want us to be missing important pieces.

Three guitars can easily fill all the gaps sonically, my sound is really mid-rangey and in your face while Dom’s is really scooped with Strat highs and low-end from the amp and then Shade will fill in any gaps we need. His main thing is synths now, but he runs his guitars through his computer. We get him to do a lot of the avant-garde stuff when we play live.”

Natural sounds like pick-scrapes, harmonics and clashing diads also add to the heaviness...

“I have a box of tricks, basically. Noises are something you can throw in there to make it even more mean-sounding. It’s something I’m addicted to, honestly. It also makes playing guitar more fun and satisfying, you’re not just playing a bunch of chords or shred stuff. I love those evil sounds that people wouldn’t necessarily know are played on guitar, made through just hands and body. It’s an intensity I’m addicted to.”