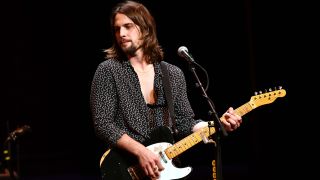 David Myhre - session whiz, solo artist and right-hand guitar man to ex-Eagle Don Felder - was raised in Anchorage, Alaska, but shifted to Nashville in the early 2010s in the (ultimately, successful) pursuit of musical opportunity.

While the closest most of us get to Alaska is re-runs of The Deadliest Catch, Myhre’s early days in Anchorage offered, in some ways, the ultimate training ground for the touring guitarist.

“I tell a lot of guitar players that I think the long winters there really do the trick when it comes to honing the craft,” he says. A gig in the next city would involve a seven hour drive through the snow, the temperature played hell with guitars. “There was a lot of variables,” he deadpans. “But it made for a crazy adventure.”

Maybe it was the environment, maybe it was the busy mind, but Myhre found time for hockey, soccer, tae kwon do (gaining his black belt) and boxing (“maybe not the best for the hands…”). The discipline he developed outside of music was crucial to sticking it out on guitar.

“I think there was never a ‘limit’,” he says. “Where I was like, ‘I did enough time. I can stop today.’ Then the more I discovered bands and new music, I just couldn’t stop. I wanted to be like those players where the guitar looks like a part of them. That’s what I was attracted to.”

Gigs with his first band turned into 2am blues bar sets in high school and then national tours with the likes of Static Cycle. His break came, though, with a move to Nashville. Sticking-out as a rock player in a country town, he landed shows with The Band Perry and Tanya Tucker, before Don Felder recruited him in 2016. Now he’s focussing on a diverse run of new solo singles, which will drop over the coming months.

We talked to Myhre about his rise through the ranks, landing the Felder gig and musical method acting.

Things took off for you after you moved to Nashville. What made you make that move down from Anchorage?

“Well, I graduated and did one semester of college in Anchorage, and realized there wasn’t really anything for me at college at that time. I wanted to do music. I don’t know why I didn’t push for LA or New York, but I had a family connection in Nashville and a couch I could sleep on!

“Musically, my upbringing was blues, rock, jazz and some old-school country, but I was never really a chicken picker. I was much more of a Les Paul, overdrive kind of guy, so moving there forced me to open up and learn some other stuff. But also, sticking to my strengths [as a rock and blues player] allowed me to stand out there, too.

Was that the first gig of that size you’d be involved in?

“Totally. And it was great. She was relaunching her career at that time - so that was a process I got to see from the ground up, which was cool. Also, I wasn’t a totally a fish out of water, but it was the most country stuff I’ve played. It allowed me to grow in that area but I got to mix it up some, as Tanya’s got this great rock/blues vibe to her vocal and her persona. She loved blending the two at the time.”

What was the most challenging element of that first big job with Tanya Tucker?

“You couldn’t really hide, you know? I came in as band leader, helped to form the band and you really just had to be wide open, work as a team and make strong decisions to help the artist.

"The artist is expressing what they want and you have to become really intuitive to cater to that. Also, just playing onstage in front of bigger crowds and having to deliver a consistent show really helped open up my stage presence. It allowed me to start to take on that lead guitar player role, too.

After playing all those gigs for others and now writing your own music, where do you think it’s left you as a player?

“I feel like I’m more in tune for myself, now that I’m focussing on my own writing. As a guitar player, I’m not being a chameleon, so it’s just sticking to what feels good. Trying to play with genuine feeling - and not letting my brain get in the way! You learn all these things that are like muscle memory and then you get onstage and you’re like, ‘I’ve got to play my hot licks!’ [laughs]

"So I’m trying to eliminate the thought and just play with emotion and fun, like when I first picked it up. Once you do that, I feel like nobody can take that from a player. When it’s honest like that, that’s when people notice. I feel like that’s the most beneficial way to stand out.”

Gary Lucas once described that to me as ‘going for god’. That sense of removing your brain from the process.

“Yeah, that’s an awesome way to word it. I think that’s the goal for a lot of us. When you’re trying to play music and you do it for a living, it becomes a career. You have to really protect the innocence of it all and stay rooted in that.”

What have you found helps to get you into that headspace?

“I think it’s helpful when you’re playing with players who are like-minded and you feel you can do that. But at the same time, even in those instances where it’s a super last minute jam, I still try to zen out and focus and not get caught up in overthinking it - being mindful and not trying to control it.

"It’s reaffirmed when you play with musicians that you idolized growing up, too. Seeing their approach and philosophy helps you to feel like you’re on the right path.”

We haven’t talked about Don Felder yet. Was that the case with him?

“Yeah, for sure. He has such a sound and style. It is just like ear candy. It has feel, it’s got articulation, you can sing what he’s playing. I’m such a melody guy and I love crazy fast riffs and he’s the perfect blend of all those worlds. It’s what I’ve always taken to as a listener. I think it’s the singer/songwriter side of me – then your playing starts mirroring that.

“We’re playing Hotel California, all these songs from the Eagles catalogue and you can sing those solos. Everybody knows every lyric, every part. It also helped me, when I was onstage, to be like, ‘OK, this is the feeling that you’re trying to chase’, or ‘I need a song like Heartache Tonight that gets people off their seat.’”

You got the gig after you sat in with Felder during a soundcheck jam in Nashville. What do you think helped you to land that job?

“A lot of it was that he saw some of my improv playing and, like I say, saw we were cut from a similar cloth as players. I think that was the biggest thing. The blues and rock background was something that he connected with. I also really rehearsed the songs and dived into the live arrangements, the original recordings - all the details, articulation - and really tried to embody the parts.

"There was no fooling him, so it was like method acting. I had to really immerse myself into that music and that catalogue. Over the years, I’ve definitely gotten more comfortable and perfected parts and, looking back now, it was a lot of gradual learning.”

Does Don Felder let you play his guitars?

“He has an insane guitar collection. It’s awesome. Just recently, we added a couple of Les Pauls into my rig that are ‘59 Reissues that he has, so you get spoiled really fast. It’s also been really awesome just seeing what kind of pick he plays with. He has like a nylon pick, which has the grip on it. That’s a big part of his sound, how that pick grabs the string. If you go back and listen to some of the stuff now, you’ll catch that.

Does your setup differ for your solo work?

“Right now, I’m using a 38-watt 3rd Power amp, Wooly Coats. It’s a local firm, based in East Nashville. Growing up, I had the Marshall amp stack, the ‘59 100-watt Plexi and it was just like, ‘Oh my gosh! I wanna be Hendrix!’ Then when you go to Nashville, from gig to gig, you quickly learn everything is mic’d up and you just need an amp that you can throw in your car.

"The Wooly Coats has built-in reverb and a hybrid master control, so you can crank it, turn down the hybrid master and have that control over the tubes. It has those kind of fat, warm Fender tones, but at the same time, punches like a Marshall.

“I’ve been working, too, with this pedal company called Vertex FX. They’re based out of LA and their pedals are awesome, so I’ve been incorporating their stuff into my board.

“But I’ve never been much of a gear head. I’ve always just learned by ear and feel, so I sometimes struggle with that side of my brain. I’ve also noticed I tend to get the most compliments on my tone when it’s really simple.”

You’ve just released a new solo single, Disguise. What are your solo plans?

“Well, songwriting has always been a part of it as much as the guitar playing for me. A lot of my time in Nashville has been spent co-writing and learning to write. They tend to start on acoustic and the production is fun, because I listen to all sorts of styles, so you can listen to Disguise and hear my pop influences and RnB melodies.

"Then some of the singles that are to follow, you’ll hear the country side and the rock ‘n’ roll side. Right now, I want to release the stuff as singles and create a world around each song. I’m excited. I’m not just a country artist, or a pop artist, it’s really everything and I’m trying to get that across.”