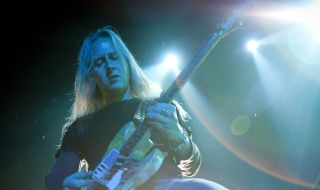 He’s the guitarist for Alice in Chains, has played on albums by Danzig and Metallica and appeared in Jerry Maguire. But what Guitar World readers really want to know is …

Black Gives Way to Blue has received so much praise from fans and critics alike. Did you ever expect that it would be received so well? — Riley Thompson

Boy, you know, it’s really hard to expect something to do well. I think you have to start by making sure it’s created from a good place for you, and you hope for the best from the others. My approach is to always try to write and make music that I’d like to hear, even if I wasn’t in this band.

Oh, yeah. We were always jacking around. The sense of humor and sarcasm in the Alice and Pantera camps was fucking extremely high. [laughs] Plus, we were pretty young. We just liked to have fun, and we spent a lot of time together. And Dime and Vinnie [Paul] always had a fucking video camera going.

It’s well known that you and Dimebag Darrell were friends. Got any good stories about him? — Jim G.

I was going out of town one time, and I had given my GMC Yukon truck to a friend to take care of. He dropped me off at the airport, and somehow Dime got a hold of my truck for the weekend and took it to a detailer place.

He put all sorts of decals on it, flames, big fucking steer horns on the front, sirens and little dice things for the tires. He probably spent three or four grand just putting the most ridiculous shit on it. [laughs] When I came back from the trip, which was, if I remember correctly, not a very good one, I wasn’t in a good mood.

So I’m waiting there like, “Where’s my fucking car?” [laughs] He knew I was gonna be pissed about it, so he actually called me and had me meet him somewhere. When I arrived and saw the car, which was all done up by Dime, I wasn’t happy at all.

But I got the joke about 10 or 15 minutes later. I guess they have the whole truck transformation on videotape, too. I’ve never seen that, but I’d like to. I bet it was fucking hilarious.

What turned you on to the G&L Rampage model and made it your No. 1 guitar for the last 20-plus years? — Kyle Mullins

I was playing in a little band with a buddy of mine that worked at a music store in Dallas, Texas. The G&L was there in the store, and I just liked how the neck felt. The back was unfinished sanded wood, so it was very easy to move up and down. It was also thin but wide, and the fret spaces were kind of big.

The guitar’s single-humbucker, tremolo system and single-volume-knob design heavily influenced me at the time, too. It just felt right. So I worked pretty hard for a while, and I got a couple paycheck advances so I could put that thing on layaway.

I remember the day I got it: I played that guitar so much that I literally slept with it. That thing’s been with me for most of my musical life. And it’s got a ton of soul and energy.

One sad note about that guitar is that I’ve just recently had to retire it. I’ve never gone on tour without it. But it started to develop a hairline crack from the neck all the way through the back of the body to the butt. It’s pretty much done, which is a bummer. It might still be usable in the studio, but its live days are over.

Layne [Staley, deceased Alice in Chains singer] always seemed to have a wicked sense of humor. The Headbangers Ball waterpark episode comes to mind. [The band showed up wearing goofy swimming suits, and Layne cast a fishing line into an aquarium, an act that got the group kicked out of the park.] Are there any practical jokes or really funny stories that stand out in your memory? — Dave V.

Layne was fucking hilarious! He was always up for a good prank or a good joke. Ah, that waterpark thing… [laughs] We knew we were gonna do this thing for MTV, and, historically, we were always fucking around with those guys, especially [host] Riki Rachtman. We stopped at a Wal-Mart and Layne and Sean [Kinney, drums] went in and bought their outfits, that little fishing pole and a Speedo for me.

That’s all I had! [laughs] But Layne was just a great guy with a good sense of humor. He really cared about everybody, and he kept things pretty light. That is, until we made music, which was when all the heavy shit came out. And that was something we had in common as well. We took that really seriously, and we had a good time doing everything else.

I find your soloing extremely tasteful. You never drag out a solo, and they are full of beautiful harmonies. Who would you say inspired you to develop this style? — Mark Franks

I think the reason I fell into what I do is maybe I’m just a little lazy. [laughs] I’ve definitely gotten lazier over the years, as far as my technical ability goes when throwing out solos. I’ve always dug feel more.

When it comes to guys that play with simplicity and feel there are three players that I look up to: Davey Johnstone [of Elton John and Alice Cooper fame], [Fleetwood Mac’s] Lindsey Buckingham and Billy Gibbons. Gibbons is fucking amazing. He can have a real minimalist approach, but he can also throw it down. Plus Billy can create a solo that’s more like another vocal part of a song.

I used to use Dean Markley strings, but I recently changed to Dunlop because I work with those guys on my signature [JC-95] Cry Baby, picks and effects and stuff. I use 10 through 46 gauges.

My favorite fast-food place has gotta be Irv’s Burgers in West Hollywood. It’s fucking awesome. It’s a little shack that’s been around since 1950. The most recent owners are a Korean family, and they’re just really friendly and cool, and they make good, solid burgers and fries. It’s nothing fancy, but it really satisfies. I’ve gotta hit that place about once a week. [laughs]

You’ve toured so much over the years. If you had to pick, who have been your top five favorite bands to tour with and why? — Carrick

We played with Van Halen pretty early on in our career, and at the first gig we actually rolled in late. We rushed to the stage, and I’m getting ready to go on, and Eddie [Van Halen] is in my pit. He’s warming up and kind of smiling at me, and I’m like, Fuck! Dude, go somewhere else and do that. [laughs]

It’s my first show and Eddie Van Halen’s eight feet away and watching me. That was one of the worst shows I ever played in my life, or at least it felt like it because I respect the guy so much.

We played with them at Lollapalooza, and they’re one of those bands you never want to play after. Ever. [laughs] Fishbone had such a musical force and energy coming off of the stage.

We were supposed to do an Alice tour with Metallica, but it never materialized. But they took me and Sean [Kinney, Alice in Chains’ drummer] out on my solo record, trying to fulfill that commitment. At least half of it anyway. [laughs] Those guys have always been real supportive and just great people to be around.

Ozzy and Black Sabbath are two of my biggest influences. They’ve even become models for dealing with all the changes we’ve gone through as a band, too. Also, we met [bassist] Mike Inez [who was in Ozzy’s band] on that tour, and he eventually became a part of Alice in Chains. Ozzy’s always been really cool to us, too. He means a lot.

We played with Slayer on Clash of the Titans in ’91, which was another early tour for us. We spent a summer with Anthrax, Megadeth and Slayer. I was never really a fan of Slayer before that. All I knew was that they were the Satan-worshipping bad guys. [laughs]

But I really grew to appreciate their music on that tour. And they turned out to be some of the nicest guys I’ve ever met in my life. They’re also another band you don’t want to follow. [laughs]