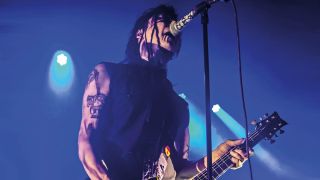 "I find I often switch fingerings, but it’s really just a throwback to when I had to relearn things out of necessity," says Death Valley High's Reyka Osburn, seen here with an Ibanez Artist. (Image credit: Savannah Bright)

San Francisco's Death Valley High recently unleashed Raise Hell, the first of a planned series of singles to drop throughout 2020.

Why focus on releasing singles?

“Instead of going into a studio and doing 10 songs, we’re going to be recording two songs at a time. My biggest concern is that you spend a year making a record and people maybe check in on you when you release it, but then, that’s that. In these days of short attention spans, you need to have some kind of event happening regularly to draw people in.“

Your choice of gear is most definitely unconventional.

“I play an Ibanez Artist. Maybe one day Ibanez might make me a signature model since no one else uses them! I’ve made some changes, adding Sperzel tuners and EMG pickups. I plug into a Seventies Marshall 50-watt JMP head and run that into a Vox 2x12 and a Marshall JCM 900 2x12 cab. I have Celestion Greenbacks in both cabs.“

You often fret chords with unusual fingerings. How did that come about?

“A long time ago I almost cut my third finger off before a gig. I had a ton of stitches and this ridiculous bulbous thing at the end of my finger, so I had to figure out how to carry on playing until it healed. I find I often switch fingerings, but it’s really just a throwback to when I had to relearn things out of necessity.“

Why did you decide to add guitarist Sean Bivins to the band?

“It’s hard for a guitar player to be a great frontman and really work the audience. I still play on a number of songs live, but from an audience’s perspective we can make a much more exciting show if I concentrate on singing and fronting the band.

Recording-wise, I’m always going to play on our records, but we have no egos about who plays what, and Sean has some great ideas. It’s whatever serves the song best ultimately.“

What do you think Death Valley High are bringing that’s unique?

“I think my voice is different from the norm in the style in which we play. I refuse to do things that you would expect or predict. Whenever I start to sing, I can only do it my way, I can’t do all the clichés. I have to be me.“