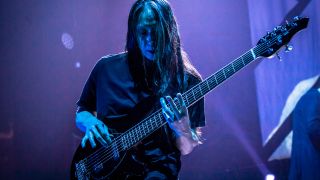 Before the coronavirus pandemic struck, Dream Theater were in the midst of playing dates as part of their Distance Over Time - Celebrating 20 Years Of Scenes From A Memory tour.

During that run, bassist John Myung chatted to Bass Player about touring life in one of prog-rock's biggest bands.

On building up endurance for Dream Theater's epic sets

"My hands are pretty conditioned at this point, but after three shows in a row, they’re begging for a break, for sure. But usually after a day off they’re good to go. I warm up well, though - there’s no way I could play if I didn’t.

"I play really slowly for at least an hour and a half before we go on stage. That’s the only way I can prepare my hands to get through three hours of playing, or at a certain point they’ll be fatigued.”

"We get to the venue about five hours before show time, and in that period I go through all my basses with my tech. I make sure that the temperature onstage is relative to how it will be at the start of show time, because of the nature of the woods and how the action moves.

"The biggest challenge for me is just getting the temperatures stable on stage so that there isn’t too big of a move for the neck plate. There are six basses to go through, so I make sure that they’re all sitting well in the environment that they’re in."

"One of the basses is tuned up a half-step, so my low B is actually a C, and that’s relative across the neck. We also have songs that are in standard tuning, and then tracks like Paralyzed which is a half-step down, and others that are a whole step down.

"What I’m finding is that my ear is gravitating towards the lower-pitched sounds. There’s definitely something to be said for tuning down; the new songs we’ve added in the low tuning sound really good.”

Scenes From A Memory: 20 years on

"For the most part, I’m trying to play what’s on the record - but there are moments when I’m playing parts that I wish I did on the album the first time round! I think it’s a matter of perspective. We play these songs with a certain vitality that isn’t there when you’re recording them in a studio, because you’re not thinking along those lines, so there are certain things that I wish I’d played differently.

"They’ll differ from the album versions. I’ll play certain sections differently, or there are some transitional things that I wish I’d done on the album, but that’s the evolution of a track."

"The initial phase of a song is to demo it in the studio and then record it, and then it starts to evolve as you spend more time with it - that’s one of the things that happen on first or second albums, when you have so much time to refine the songs. You get to record things a little bit differently.

"When you write these songs you don’t get to test-drive them in the live setting, because you’re behind a monitor or a set of headphones, which gives you an analytical perspective. That’s what makes live music so great - you don’t have the constraints of the studio setting. You capture the initial freshness in the studio, of course. I guess this is what live albums are for, right?"

Dream Theater's Distance Over Time is out now on InsideOutMusic.