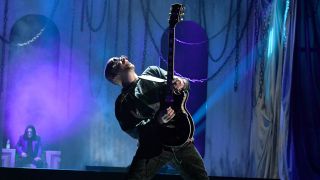 Sure enough, come that Monday, the three musicians convened in Watt’s studio - “the Watt lab,” as Smith jokingly calls it - and began making music. “It was, ‘Who’s got a riff?’ ‘Who’s got an idea?’,” Smith recalls. “We’d get two parts together and then start recording immediately. That kept it fresh.”

“A lot of the stuff was first or second take,” McKagan adds. “And everything was miked up great, which is something Andrew really knows how to do. That might sound elementary but it’s not. He got my sound perfectly, and it’s not a simple thing. And his drum sounds are impeccable.”

McKagan says he met Watt in his California Breed days and recalls him as a “killer young guitar player - a very Page-y, Mick Ronson-y, '70s guy.” Working with him in a studio situation, he says, “he reminded me of a guy named West Arkeen, who was kind of like the sixth member of Guns N’ Roses back in the day.

“Andrew has that same energy, and it was nice to be around that again. He’s super-smart - melodies always in his head, quick in recording. He knows how to capture the thing.”

Musically, “Andrew is an old soul,” says Smith, who has worked with Watt on numerous projects over the years and calls him his “little brother.” “His record collection growing up was the same shit I grew up on - Zeppelin, Sabbath, the Stones, the Beatles, the Who, Deep Purple. It’s in his DNA.

"And because he’s younger he also loves the Chili Peppers and Jane’s Addiction and Soundgarden and Pearl Jam and all that. And then he has the modern pop thing, too. He’s just very musically open.”

“Between the three of us, the chemistry in the studio just worked,” McKagan says. “It’s pretty simple - three guys who can play and write songs together pretty well got in the same room for four days, and this record is the product.”

“And it was a blast,” Smith says, then laughs.

“Numerous times, daily, while we were playing we’d look at each other, like, ‘I can’t believe this is what we get to fucking do, man! This is fucking awesome!’”