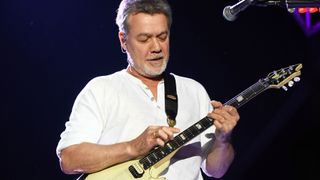 They call Eddie Van Halen’s electric guitar tone the Brown Sound but really it’s the Friday Night Sound. It is one of the most evocative guitar tones ever created. Harmonically reactive, juicy, volatile; it has the power to erase Monday morning from the calendar. How did he do it?

Careful experimentation with his technique, banks of Marshall Super Lead 100-watt heads and ambitious DIY guitar design - projects such as the Frankenstrat, which saw a Fender Strat body equipped with a Gibson PAF humbucker in the bridge, with a Floyd Rose later applied to accommodate a flamboyant style that was and still sounds ahead of its time.

From time to time Van Halen would season this tone generously with a MXR Phase 90, tape echo, flanger and wah, but still, as with all the world’s greatest players, his tone is greater than the sum of his signal chain.

Early on, it was very clear that Eddie Van Halen’s style could not be fully evolved on any off-the-shelf instrument. By ’74, he got to making a guitar that would combine Gibson’s power with a Fender-esque feel. This was the Frankenstrat.

Put together with a 50-dollar Strat body and 80-dollar neck that Charvel had rejected, the Frankenstrat had a Gibson decal on the headstock for a while. It was originally finished in white with black stripes, with Van Halen adding the red some time later. “I did not have the money and the guitar I wanted didn’t exist,” he told Guitar World in 2006.

In 1979, Van Halen took receipt of the Bumblebee. Used throughout the touring for Van Halen II, it was built by Charvel and finished in black with yellow stripes, with a rudimentary locking vibrato for dive-bombs and a DiMarzio humbucker in the bridge. Nothing was off-limits; a Danelectro neck on a Charvel body? Well, why not? Whatever works. A true seeker has got to keep an open mind.

The designs would get more outlandish. Check out the DragonSnake he was brandishing on the cover of Guitar World back in ’81. It makes his Ibanez Destroyer 2459, aka the Shark, look tame. Van Halen would use his Kramer signature S-style, which applied a similar red, black and white finish to the Frankenstrat but with the hockey-stick headstock. He had a Kramer doubleneck, too, and signature models with Ernie Ball Music Man and Peavey.

Perhaps it was inevitable that Van Halen’s tone chasing would one day culminate in him steering the development of his own brand, EVH Gear. Now a subsidiary of Fender, producing an expansive lineup of signature Van Halen guitars such as the Wolfgang, amplifiers, and effects co-developed with MXR, EVH Gear is the first place very much a one-stop shop for any player looking for some of that atomic punk mojo.

EVH '79 Bumblebee - $19,800
Limited to 50 units worldwide, the EVH Bumblebee is a meticulous recreation of the S-style hotrod built by Wayne Charvel and featured on the cover of Van Halen II. There are all kinds of weird and wonderful details here.
The electronics are rear-mounted, so there is no pickguard. The original had a Mighty Mite pickup that was replaced by a DiMarzio Super Distortion that was modded with the more vintage-voiced alnico II magnet from a PAF.
The original Bumblebee was buried with Dimebag Darrell. This is as close to the original as you’ll get. It’s got the early prototype locking vibrato. It’s signed by Van Halen. It’s… It’s 20 grand!

EVH Striped Series Frankie in Red with Black and White Stripes Relic - $1,699.99
Unveiled at NAMM 2020, the Frankie is a serious, pro-quality replica of the latter-period Frankenstrat. It’s got the basswood body and the quarter-sawn maple neck, with a 12-16” compound radius maple fretboard.
It has a single open-coil EVH Wolfgang humbucker in the bridge, a locking Floyd Rose vibrato with a D-Tuna for drop-D tunings on the fly, and there is a single control marked “tone” but really it’s volume. You’ll need that for nailing those swells on Cathedral.

EVH Wolfgang Standard in Matte Army Drab - $599.99
This year’s NAMM also saw the rollout of a heap of new finishes for the Wolfgang Standard. If this Wolfgang in Matte Army Drab is a little low-key for your tastes, it is also available in Taxi Cab Yellow. Either way, you’ve got a high-value shredder on your hands.
There’s an EVH-branded Floyd Rose for dive-bombs, a hand-rubbed oil finish on the neck. Again, this has a 12"-16” compound radius fingerboard with 22 jumbo nickel frets offering a speedy ride.

Squier Affinity Stratocaster HSS in Olympic White - $229.99
If your budget won’t stretch to a Wolfgang Standard, why not embrace the fiscal restraints that were placed on Van Halen in ’73 and get yourself a highly respectable Affinity Series Strat from Squier?
It has an HSS pickup configuration and a tremolo. It is really cheap, available in some cool finishes, and while it is excellent for sharpening up your chops, you could always go all Dr. Frankenstein on it and mod it into oblivion when the time is right.

In the beginning it was Marshall Super Lead 100-watt heads and lots of them. Legends have grown about what sort of mods were made, but those who have worked on Van Halen’s Marshalls - such as Dave Suhr - have noted only the most minor changes. Others disagree. But those old Marshalls often had their own peculiarities when it came to circuitry.

He used a variac transformer to lower the output voltages for his amps, an epiphany he had after getting British Marshall that was wired for the U.K.’s standard voltage of 230V. The working theory goes that at lower voltages the amp was quieter and had warmer, more saturated distortion - the same principle is at play with Fuzz pedals, such as the eponymous Variac Fuzz from MXR, where choking the voltages gets a more extreme breakup.

You can, of course, wreck your amp if you are not careful but this was Van Halen improvising once more, making discoveries as he went.

These days you don’t have to play is a suite of Van Halen signature amps that don’t require anything like that to get that gain.

EVH 5150III 50-watt 6L6 head - $999.99
A winner of Guitar World’s Platinum Award, this is what our own Chris Gill described as the “perfect gigging and studio amp for discriminating players.”
More compact than its 100-watt sibling but losing none of the venom, this third-gen EVH signature head has three independent channels offering awesome clean tones, through crunch and super-saturated high-gain rock and metal tones.
Revoiced for a little more aggression on the lead channel, you’ll find plenty rich harmonic gain. Those who prefer a more British voicing on their amp should check out the EL34 version.

EVH 5150III 4x12” Extension Cabinet - $999.99
A close-backed cabinet that’s loaded with four Celestion Custom G12EVH Speakers and finished in matching Ivory vinyl, this is just the thing to get the most out of that head. Of course, you could go for a 2x12” or 1x12” extension cabinet.

EVH 5150 III LBX 15-watt tube head - $599.99
A portable, lunchbox amp that’s loud enough for small gigs but also considerate enough to have an switchable to 1/4 power for at-home practice. The full-size 5150III head’s Crunch and Full Burn channels are present and correct, with both footswitchable. Under the hood there are 5 EECC83S tubes in the preamp and a pair of EL84s in the power amp stage.

You’re going to want some effects if you are to recreate all the tones from the Van Halen back catalogue but EVH himself has always enjoyed the fundamentals of guitar playing, his guitar running straight into an amp. His technique blossomed out of the lack of effects; he couldn’t afford them, so why not make his technique the effect?

That said, there have been some crucial stompboxes in his rig. He used an Echoplex EP-3 on the early Van Halen records, and a variety of MXR modulation pedals have been perennials. His recent live rigs have included a Boss OC-3 Super Octave, a Boss CE-5 Chorus Ensemble and an MXR Smart Gate to kill some of the noise, and a rack-mounted Roland SDE-3000.

The good news is all of these come cheap, expect perhaps the high-line delay and echo effects. Check out our feature on his live rig here for his amp and pedal settings.

Boss DD-500 Digital Delay - $349.99
The DD-500 of the finest digital delays on the market, with a dozen delay modes, customizable controls, a bright LED display, programmable memory banks, looper, buffered/true bypass and 32-bit/96kH processing. And it is a lot less hassle than setting up a rack for just one Roland SDE-300 unit.
Besides, the Vintage Digital mode should get you some of that EVH tone. Indeed, all in, the DD-500 has all the delay you’d need and more for hard rock. Though check out the DD-8 below if you’re looking for a budget alternative.

Catalinbread Belle Epoch Deluxe - $359.99
Eric Johnson calls this the best-sounding EP3 emulator on the market, and its much-vaunted onboard preamp on-hand will sure sweeten your tone. Go crazy with oscillations, or just dial in some slapback echo.

MXR EVH117 Eddie Van Halen Flanger Pedal - $189.99
As used by Eddie himself. This is more than just a branded enclosure, with controls for Manual, Width, Speed, and Regeneration, and a vintage bucket-brigade circuit for old-school analog flanger tones. Kick on the EVH switch for the exact settings used on Unchained.

Dunlop EVH95 Eddie Van Halen Signature Cry Baby Wah Pedal - $168.97
Dunlop and EVH’s fruitful partnership extends to this smart Bumblebee wah, which ships with a worn in feel and sweep and has blue LEDs to let you know if it’s in bypass mode.

MXR EVH Phase 90 Eddie Van Halen Phase Pedal - $129.99
The Script switch is a welcome addition to this compact, retro-voiced phaser, allowing you to switch modes between the mellower Script Logo tone of the 1974 original models and the Block Logo phaser that came a few years later. This is a Van Halen essential. It looks cool and it’s cheap.

Boss CE-5 Chorus Ensemble - $129.99
Another from Van Halen’s live rig circa-2015, and another pedalboard essential that is cheap, and yet delivers a versatile stereo chorus that can go modern or vintage. He uses it on Pretty Woman and Drop Dead Legs.

Boss OC-3 Super Octave Pedal - $129.99
A little brown box to complete your Brown Sound? Why not? He only uses it for the outro to Drop Dead Legs but this is such good value, with polyphonic octave shifting capabilities that let you go up one or down two.


MXR EVH 5150 Overdrive - $152.79
If you don’t want to shell out for a new amp but would like some of that signature dirt in your signal - which, combined with good technique, a little MXR Phase 90 should get you a usable Van Halen tone - this replicates the blue channel from the 5150III amp.
It’s probably more gain than you’d need, but it has an onboard noise gate to kill any hiss, and a three-band EQ and boost for that amp-in-a-box performance.

Boss DD-8 Digital Delay - $159.99
Featuring 11 delay types in one compact Boss enclosure, the DD-8 is quite possibly the best-value delay pedal on the market. For EVH vibes there is a tape echo mode and an analog bucket-brigade style delay that’s pretty cool. It also has inputs for an external expression pedal or tap-tempo.