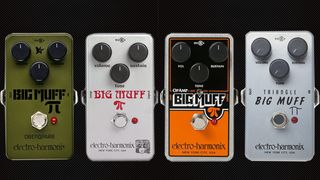 It may have a childish name, the enclosure may be massive, and sure, it will eat your mids, but the Electro-Harmonix Big Muff is a stone-cold classic. We’ve heard this essential fuzz pedal called everything from a 'guitar army' to a 'wall of sound' to a 'vacuum', showing that its unique tone is hard to describe.

Complicating matters is the fact that many different iterations of the circuit have been released over the years, with some changes being minor, and some being completely revolutionary. As a result, many players have their own preferences and there’s been a thriving market in clones, DIY kits and boutique reissues of specific Big Muff circuits.

EHX has recently reissued the most sought-after variants in new mini enclosures, but which is the mightiest of the Muffs? Let’s find out...

Where it all began...

The Triangle is so-called because of the layout of its controls. Those of you who were paying attention in Big Muffs 101 will have spotted that other iterations also had a triangular layout, but never mind.

This Triangle is based on the first Big Muffs produced in 1969, many on perfboard, allegedly hand-wired by EHX founder Mike Matthews himself. This reissue was specifically based on a unit owned by legendary Big Muff collector Kit Rae. It’s an astonishingly smooth tone that’s great for legato lead lines and is almost un-fuzzy due to the gorgeously even way it clips your signal.

David Gilmour and J Mascis are among the players that have fallen for the Violet decal Ram’s Head tone, the first major iteration of the Big Muff after the Triangle. Like the Triangle, there was a lot of variation between units based on the parts available, so EHX have made a valiant effort to plant a flag somewhere in the middle of the different circuits and sounds of that period.

To our ear, it’s a somewhat louder and more scooped muff tone, with a much grittier sound. The tonestack isn’t as usable as the Triangle, being more extreme at the edges. Like the others, the sustain has only one real setting - on full.

Tanks for the tone...

The legend goes that the original EHX Russian Muffs were made out of decommissioned tanks, although this is more likely Matthews’ flair for a marketing line than the truth. As for sounds, the Russian Muff is noticeably bassier, meaning that the tone stack is more usable without prematurely getting ‘raspy’ as you turn to the right.

It’s smoother, with more of that violin tone than the Ram, but still not quite as smooth as the Triangle. We think of the bass sounds on Sonic Youth’s 100% as we’re playing, and it prompts us to switch from guitar to bass, where unsurprisingly the Russian Muff shines.

If, like us, your interest in the Big Muff was sparked by hearing The Smashing Pumpkins’ 1993 album Siamese Dream, your first encounter with a shop-bought Big Muff might have been a disappointment. That’s because the Big Muff Billy Corgan used on that record was a vintage Op-Amp edition, an interesting side-street in the history of the Big Muff where the circuit was re-drawn.

More mid-forward than its siblings, it’s also somewhat fuzzier and more saturated, while retaining the square-wave general tunnel when playing chords in quick succession. For a wall of sound, accept no substitutes.