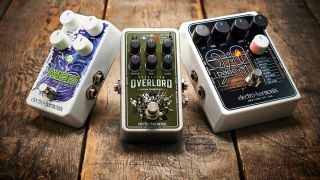 Electro-Harmonix always has something new up its sleeve. Each of this particular trio, released in the latter half of 2019, represents a particular strand of EHX’s extensive catalogue.

The Mod 11 follows the tradition set by the Canyon Delay and the Oceans 11 Reverb, both of which provide 11 distinct variations on their nominative effect chosen from a rotary switch.

It was inevitable there would be a modulation variation at some point. The Bass9 is the latest 9-series pedal following on from the B9, C9, Key9, Synth9 and Mel9 pedals, which all endow your guitar with the sound of nine variations of a particular genre of keyboard instrument. Interestingly, this one provides a mixture of bass guitar sounds as well as bass keyboards.

Finally, the Operation Overlord is the latest instance of an drive pedal initially released in a larger format, now shrunk down to a more pedalboard-friendly Nano size. None of the three nine-volt pedals support battery power, but they do include an adaptor as part of the package.

Dedicated pedals for much-used single modulation effects are perhaps the preferred option for many, but a pedal that puts loads of different ones into one place can be very practical, especially if it’s as pedalboard-friendly as the Mod 11.

Eleven different effects have either two or three variations: the Filter can be low-pass, high-pass or bandpass for instance, while the Uni-Vibe emulation offers the Chorus and Vibrato modes of the original. Each effect has knobs for Depth, Rate and either Volume or a parameter specific to the effect, plus two secondary parameters for tweakability.

Effects include Fender amp-style tremolo, a Small Stone-like phaser and a flanger that channels some of the textures of an Electric Mistress. Versatility is increased by a tap tempo facility and the footswitch lets you add an effect for as long as you hold it down

Verdict: A comprehensive selection of effects as a sole modulation pedal or for filling your pedalboard’s sonic gaps. 8/10

The original Operation Overlord was designed to work for a variety of instruments, so it had three selectable input levels and (optional) stereo operation. This one keeps the input level option but loses the stereo.

This is a JFET-based drive with three-band active EQ to set the tonal context just how you need it. In normal mode, the amp-like drive runs from a gritty almost-clean through to all-out crunch, but you can engage the Boost knob (also available via an external footswitch) to put an extra drive circuit at the start of the chain for extra saturation, verging on fuzz-like.

The secret weapon, though, is the Dry knob, increasing flexibility by blending normal and effected sounds to build definition into dirty sounds or endow clean sounds with some hair, for example. The result is an everyman drive that’ll slot right into many different musical scenarios.

Verdict: An affordable and versatile drive/distortion packed into a practical space-saving footprint. 8/10

While previous 9 Series pedals have put classic keyboard sounds under guitarists’ fingers, this one seems closer to home as some of its programs emulate bass guitars and it also does octave pedal sounds, too, in particular a dead-ringer of the EHX Octave Multiplexer.

With control over dry and effect volume, you get the choice of whether you want to go with a full one or two-octave-down bass or to just mix some of it in with your standard sound.

Tracking is pretty flawless, and while the ‘Precision’ sounded fat and solid, the ‘Longhorn’ emulation of a vintage Danelectro six-string bass was the most useful program because you can adjust its pitch in semitones from unity to an octave down, giving a range of baritones or drop tuning. Elsewhere, the bowed sounds and various synth bass types offer plenty of opportunity for low-end grooving.

Verdict: Indulge in an instant extension of a six-string’s lower range at the flick of a footswitch. 9/10