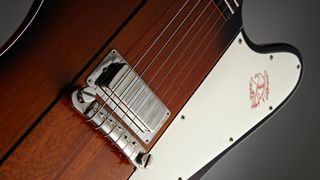 There have been numerous Firebird reincarnations since they were discontinued in 1970, but during their original run at Gibson’s Kalamazoo factory in the '60s, the Firebird I, III, V and VII models appeared in two different forms widely known as ‘reverse’ and ‘non-reverse’.

The Explorer-like reverse Firebirds appeared first in 1963 and were superseded by their non-reverse counterparts in 1965.

As if eight different Firebirds emerging within this short time isn’t convoluted enough, the waters muddy even further with some instruments having left the factory during the ’65 transition phase with both reverse and non-reverse specs.

Nevertheless, in this article – the first of our two-part focus on Firebirds - we aim to clear things up and make it simple to identify all four of the early reverse-style ’Birds at a glance.

Announced in the spring of ’63, they were intended to compete directly with Fender and boost Gibson’s flagging solidbody sales. However, Fender argued the Firebirds’ “new-style offset body” mirrored its own patented “off-set waist” body shape and, following talks, Gibson decided to change the design - albeit to a far more Fender-like one!

We’ll be looking at those later non-reverse models next time, but for now here’s a rundown of Gibson’s original Firebird line-up...

And as per the style of Junior and TV models, the reverse Firebird I features an unbound dot inlay rosewood fingerboard and a single pickup with volume and tone controls.

This particular model was also the least expensive instrument in the range with a list price of $189.50.

A Sunburst finish was standard across the board, but in order to help Gibson shake off its staid, old-fashioned image and appeal to the more forward-thinking younger generation, all Firebirds were offered in a choice of 10 custom colors for an extra $15.

In the same vein as the Les Paul/SG Special, the $249.50 reverse Firebird III features dual pickups with individual tone and volume controls and a single-bound rosewood fretboard with dot inlays.

These models are sometimes confused with the equally twin mini-humbucker-loaded Firebird V but can be easily differentiated by their dot fretboard markers, compensated bar bridge and short flat-arm Vibrola (Firebird Vs have trapezoid inlays, a Tune-o-matic bridge and Deluxe Vibrolas as standard).

All instruments in the reverse line-up feature bespoke Firebird pickups, whereas the later non-reverse Firebird I and III models came with two and three black ‘soapbar’ P-90 pickups respectively.

The original Firebird pickup is a unique device that evolved from theKalamazoo-era Epiphone mini-humbucker - itself derived from the Seth Lover-designed PAF humbucker.

Distinguished by its solid metal cover, it was constructed using blade magnets (as opposed to passive screws and slugs) along with inductance-enhancing ferrous reflector plates.

In the style of Les Paul and SG Standards, the reverse Firebird V sat one step below the top of the pecking order while sporting a single-bound rosewood fretboard with trapezoid inlays and dual pickups featuring separate volume and tone controls.

Although identical to the reverse Firebird III in terms of pickups and electronics, an extra $75.50 would buy you an altogether fancier guitar with a ‘leaf-and-lyre’-engraved Deluxe Vibrola and a fully adjustable Tune-o-matic bridge.

In terms of body/neck construction, the reverse Firebirds utilized a unique neck-through-body design with wings glued on either side.

They were, however, troublesome guitars to build and were notorious for suffering headstock fractures.

An inherent weak spot behind the nut coupled with heavy banjo-style tuners (located along the treble side of the headstock) meant that breaks even occurred inside the case. Consequently, guitars with broken headstocks became so common they are often referred to as having ‘Firebird disease’.

At the top of the line sat the $445 Firebird VII resplendent with Les Paul/SG Custom-style gold-plated hardware, three humbucking pickups and a single-bound ebony fretboard with pearl block inlays.

As per the Firebird V, these flagship ’Birds boasted a 'leaf-and-lyre’-engraved Deluxe Vibrola and fully adjustable Tune-o-matic bridge.The other models in the line came with nickel-plated hardware and rosewood ’boards, but VIIs perched well above the rest with their blingier upmarket appointments and triple mini-humbucker configuration.

Famously used by Johnny Winter, Eric Clapton and Brian Jones, reverse Firebirds have a unique tone that sits somewhere between a Fender single coil and a PAF humbucker guitar.

This tone is known for its midrange bite and can be up front and assertive with a good balance between thickness and sparkle. Although various reverse Firebird reissues have been released over the years, unfaithful pickup reproductions mean they don’t sound quite the same as these originals.