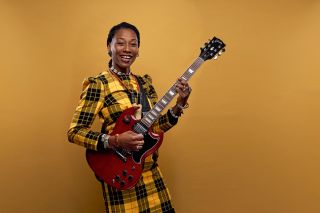 A prolific collaborator, the Grammy Award nominee has indeed cast her creative net far and wide while featuring on numerous studio recordings alongside the likes of Flea, Herbie Hancock and Bobby Womack, and sharing the stage with such luminaries as Paul McCartney, John Paul Jones and Damon Albarn.

“When I started to play guitar, it resolved everything,” she tells us prior to her Bristol show. “It was like healing my soul. Being able to express myself through the guitar was more important than I could have imagined. It totally changed my life. There were no more questions about who I was supposed to be.”

How did the Malian music scene shape you as a musician?

“I grew up in Mali and, naturally, I grew up with traditional music. Malian music is diverse – we’ve got lots of different types. You can have 10 artists from Mali at the same festival and each of them will bring something different. And this is because of our traditional instruments. Compared with many countries in Africa, we’re still using them.”

What traditional instruments are commonly used in Mali?

“The kora, bolon, balafon, soku, ngoni, kamalengoni… There are many, many instruments, but each of them speaks a different language. Each one will give you a different taste or flavour of music.

“Depending on the instrument, you naturally change the way you sing – the EQ and sonority of the vocal. Each instrument speaks a language and you have to adapt to it. After that kind of schooling, you can adapt to any kind of music.”

“We have artists like Tinariwen and Ali Farka Touré who have a certain sound. People recognise the sound of Malian guitar players. We transpose the ngoni – an instrument from this area – to the electric guitar. The ngoni is like the guitar.

“If you can play this instrument, you can easily adapt to playing guitar. We don’t learn music at school in Mali. It’s all about the ear. You listen to it and when you get your guitar, you transpose your traditional instrument to the guitar. It’s a typical Malian thing.

“It’s very natural for us, because those instruments – the ngoni, kamalengoni and kora – are already blues. The sound is already blues. You feel it. You listen to it and you know how to do it. It’s like talking. It’s like speaking a language. It’s a natural thing. You don’t have to go to school to learn how to play.”

What prompted you to play the guitar?

“I’m the first solo female electric guitar player in Mali; I’ve never seen it before. I know of some artists who touch on the acoustic guitar but not electric guitar. I was wondering to myself, ‘If we are so rich culturally, why are there so many instruments being played just by men?’ It seemed natural for me to ask, ‘If men can do it, why can’t [women] try?’ I was asking myself a lot of questions.”

Do you feel as if you’ve helped Malian music evolve in some way?

How did your journey as a guitarist begin?

“I went to live in Paris in 2002 when I was 19 years old, and I started to collaborate with other musicians in this small coffee shop where I met lots of different artists. I said to myself, ‘If you really want to be an artist, and if you want your independence, you should not be just a singer.

“You have to learn an instrument so you can perform without [relying] on anybody else.’ So I bought a traditional instrument – a kamalengoni – and later, in 2007, I bought my first guitar. I started to play the kamalengoni on the guitar after I realised that you can just switch over.”

How did you begin writing songs on the guitar?

“I just went to the market, bought a guitar book to study the basic things and started composing. Voilà! I looked at the book and started to connect things from the images. I cannot read music and many people don’t want me to. Damon Albarn told me, ‘Don’t go there – your instinct is very strong.’

“Many of my artist friends told me, ‘Keep working on your instinct – it’s where you have your own style of playing.’ I’m working on this first and maybe later I’ll try to learn more theory. Music is natural and sometimes we lose this aspect by thinking too technically. It’s a blues thing. Everything is physical.”

What was the first guitar you bought?

“The first electric I got was a cheap Gibson-style guitar, which I bought for €200 in Paris. I had it for about two years. I’m still using my first [nylon-string] acoustic guitar. In the studio, I always compose with an acoustic guitar, but not that one.

“At home, I have about 15 guitars. I love buying guitars. Every time I go America, the first thing I do is go to the Guitar Center. Women like shopping and I love to buy guitars! I don’t know why. I’m crazy about that.

“We’re working with Gibson at the moment, we have an endorsement, but I don’t have a favourite guitar. It’s more about the qualities of who is playing. It’s in the fingers. In Mali, I’m used to seeing people with nothing. But when they plug their instrument in, they will give you the blues.”

What guitars do you have with you now?

“Just the Gibson SG Standards. We have two – a black one and a [Cherry] Red one. Before I started working with Gibson, I was pregnant and I couldn’t use something heavy. I was trying many guitars, but the SG is light and sounds so strong and powerful.”

What’s it like being a working mother on the road?

“It’s my job [laughs]! When you’re a mum, sometimes you have more responsibility, because the baby needs you for the feeding. I’m not sleeping throughout the whole night at the moment, because he’s feeding. It’s hard work, but it’s possible.

“It is possible. You can be a woman and you can have the same label as a man, if you want, but you have to work. You have to be hard-working. When I go to Mali, I like to react and show them we can change things. If we don’t try, we will never know.

“When I go to Bamako and I go to the bars in the night, the sound is huge, but you never see a woman playing there. So, one day, I’m going to go out there for three weeks and I’m going to play the clubs every night to inspire some females. You know, ‘Join me, let’s go!’

“I don’t want to be the only one. It’s beautiful to see a woman with a guitar. You don’t see it so much and it’s a nice image. Also, we have a different feeling that people need to know about. We need to hear more female artists, especially in Mali.

“I’m doing it my way and hopefully other female artists will come along and do it their way. I think there’s a big hop coming. That’s why I don’t want to stop.”

What themes and ideas do you explore in your lyrics?

“I speak in Bambara, the national language of Mali. It’s the best way to connect with people there. I like to talk to my generation about how to save the next generation.

“The subject is all about problems in society: women and how we can be ourselves; how to stop bleaching our skin; how to stop arranged marriage; and how to stop female genital mutilation. We still have many issues to talk about.

“It’s my way to talk about love. There is always something strong and heavy behind my lyrics: reality.”

How do you go about composing songs?

“I always compose on guitar. The guitar is an amazing way to express yourself. I cry a lot when I’m writing, because I associate my own life with what I’m talking about. Then things are lighter, and I let go and fly like a bird. The melodies come and, very soon, there is a song.

“It’s very fast and very deep at the same time, but free and simple. There’s me and my voice, and the guitar is in the middle to give the balance. The voice is the questions and the guitar is the answers. It’s about putting the emotions first.

“I let my arms, heart and mouth connect with my soul. When this comes, it’s like crying. I cry and I feel better. Then I’ll listen to it. I let the song cry first. I don’t write songs to cry to afterwards. I cry first, then the song comes. It’s the blues.”

Are you constantly writing music?

“Yes. I’m always with my guitar. I have 100 songs ready now. I work all the time and anticipate things – I don’t need to wait for somebody else to be able to compose. Before I learned guitar, I was always doing things twice: on my own and then with someone else.

How do you see the future of the guitar as an instrument?

“I want to keep on playing the guitar. I love the guitar. People, especially women, must learn to love the instrument – that could mean a big change for the future. I would like to help people focus more on the instruments and on being themselves.

What does playing the guitar mean to you, personally?

“I need my guitar for everything. I didn’t know what type of music I was supposed to play when I first started writing. I had my lyrics and could compose with the voice, but I wanted to make music where there were no boundaries or rules. It’s strange when you have to fight to know how you are supposed to be or who you are.

“You have to find the answer for yourself – nobody will do it for you. This is the spiritual part of playing the guitar. I’ve had to run away from my family, otherwise playing guitar would be impossible. I’ve broken something between me and my family to be who I am today. I’m a survivor.”