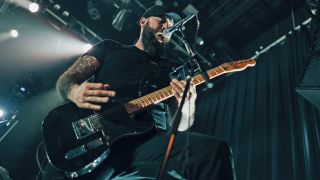 The road is a magical place in the imaginations of aspiring rock stars. Piling into a van with your friends, spending your days traveling to new cities and your nights playing in front of adoring crowds, all fueled by nothing more than cheap beer, cheaper food and whatever illicit substances you can scrounge together?

Who needs frat parties when you can live that life while getting paid literally dozens of dollars every single night?

Of course, that’s just fantasy. Touring is a complicated business, where creature comforts can be few and far between, finances are tight and every great show can be canceled out by a night playing to just the bartender. All that while trying to keep your rig in working condition can drive a guitarist insane.

Four Year Strong guitarist/vocalist Dan O’Connor knows all about that life. For the past almost two decades, his band has criss-crossed the U.S. and the rest of the world. Somewhat miraculously, the band has managed to mostly avoid beating the daylights out of each other.

But that doesn’t mean there haven’t been challenges; one tour saw their merch guy get bit by a brown recluse spider while sitting on a toilet. The band and their crew boarded the bus, drove through the night to the next stop and ended up spending most of the day in a Las Vegas hospital.

Venomous wildlife aside, O’Connor says most of his band’s bad fortunes have come at the expense of their vehicles and the people hired to pilot them.

“There was a tour we were on, I think it must have been Taste of Chaos in 2008, and we just had a lot of issues with our vehicle,” he recalls. “At that time we were on a bus and the driver we had did a lot of silly things and ended up breaking off an axle of our trailer, which belonged to us.

"One time he drove under a bridge that was too low and crashed all the air conditioners off the roof. We had to fire him.”

Aside from making sure you have a AAA membership and a driver with common sense, O’Connor advises young guitarists heading out for their first jaunt in a van to be conscious of van etiquette: every band member should have personal space to call their own and, above all, you must practice proper hygiene. Remember: just because your riffs are filthy, doesn’t mean you have to be.

“The most important thing to feeling comfortable in the van is to make sure you get a shower in before a long drive. There’s nothing worse than playing a show, being sweaty and then getting in the van and having to drive eight hours...

"Even if you do change your clothes and don’t shower, you just don’t feel clean.”

That advice should keep bandmates happy. But remember: take care of your gear and it will take care of you. O’Connor advises all touring guitarists to invest in proper road cases, do your best to keep moisture away from your gear before a long drive, make room in the van for spares of the most essential stuff, and make sure you leave a good impression on your future fans by doing your homework.

“You don’t have to have the most expensive gear to get the best tone, but make sure you take the time with your bandmates to make sure, as a whole, you don’t sound super shrilly.

"It’s not just, ‘Let’s go and play as loud as possible.’ You have a tone that’s good for a live show,” he says. “Then go out and play as many shows as you can.”