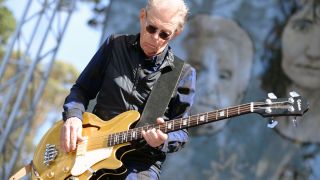 In the hands of Jack Casady, the teen-aged bass guitar soared to unprecedented new heights via the aptly-named Jefferson Airplane and the soon-to-emerge Hot Tuna, in the late ’60s.

In the ensuing 50 years, Casady has continued to leave his indelible mark on bass line construction via taste, tone, dynamics, melodicism, groove, and feel with everyone from Jimi Hendrix, David Crosby, SVT, and Warren Zevon to Gov’t Mule, Rusted Root, Peter Rowan, and of course, various editions of the unstoppable Hot Tuna.

We thought it was high time to look back at Casady’s low-end legacy.

First-Wave Jack: The 21-year-old Casady was bold and bursting with ideas. As one critic wrote, looking back, “No-one was playing bass like this in 1966.”

Nine-Minute, Free-Form Jack: Thanks to taking on such jazz influences as Eric Dolphy and Charles Mingus in his developing years, Casady has long displayed a sense of improvisation and exploration that helped lay a cornerstone for the still-thriving jam band movement.

Also of note from After Bathing at Baxters is Jack’s work on the horn-intoned meditation, Rejoyce.

Lead Bass Jack: Casady has always been comfortable playing in the upper-register and with taking on a lead or counter-melody role. It’s all part of his masterful sense of orchestration.

Jack Meets Jimi: In retrospect, this pairing, though rare, made perfect sense and was pure magic. The two also came together for Killing Floor, from Jimi’s Live at Winterland [Rykodisc, 1987].

In this behind-the-scenes footage, you can spot Casady at 3:00.

Jack Of All Trades: One of Casady’s tour-de-force performances, incorporating pretty much all of his stylistic and conceptual signatures. For a complete transcription of the track, see BP Holiday, 2011.

Support Jack: A stellar example of Casady’s aptitude for, above all else, supporting a great song.

Solo Jack: Casady turns up the funk and effects on this bass-led instrumental from his lone solo album. Also check out his huge-toned acoustic bass guitar performance on Outside.