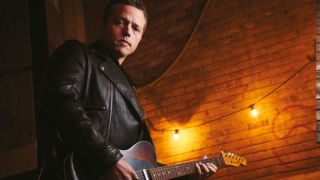 Asked to describe his approach to guitar playing, alt-country rocker Jason Isbell – never at a loss for an interesting and unique viewpoint – sums it up thusly.

“I think I’m more of a sculptor. I start out with a lot of options and I take out what I don’t need.” He lets out a laugh, then says, “I guess that’s a funny way of saying that as I get older, I tend to play fewer notes to try and make my point.”

Aided by his impeccable backing band, the 400 Unit, Isbell has just released his seventh solo album, Reunions, and were it not for the pandemic, he’d be promoting it on the road right now.

While he readily admits he’s itching to play the new songs live and that he’s missing the camaraderie of his band and crew, Isbell is philosophical about how his problems figure into the global picture.

“Sitting at home and seeing everything that’s going on, it makes any anxieties I’m feeling about my current situation seem pretty insignificant,” he says. “There’s so much happening right now that I can’t be consumed with thoughts about how I can’t tour at the moment. Every artist is going through that, so it’s not just me.”

He pauses, then adds, “That said, it’ll be pretty incredible when we do get back out there and put on a big rock show for everybody. I know that’ll be a real celebration when we get to do it again.”

Since leaving the Drive-By Truckers in 2007, Isbell has released a string of superb roots-rock albums, including his masterful commercial breakthrough, 2013’s Southeastern.

For his fourth collaboration with hit-making producer Dave Cobb, he sought to marry his approach toward lean, traditional instrumentation with a more polished, studio-savvy sound.

“I didn’t want to make a record that we couldn’t recreate live, but at the same time the songs I had written felt like they needed something more high fidelity and transportive,” Isbell says. “I wanted a record that would put the listener in a different place or frame of mind than he or she was in.

“Dave understood exactly what I was going for, and I let him pull out whatever stops he wanted in the studio. I didn’t try to dictate too much to him, although there were certain phrases that I used a lot to guide him.”

One such phrase was “clean and loud,” which turned out to be the guiding principle for the songs Running With Our Eyes Closed and Dreamsicle. On these tracks Isbell paired a 1960 Strat (on the out-of-phase setting) with a Roland Jazz Chorus.

“I don’t know many people making the kind of music we do who use a Roland amp,” he says. “That amp with that guitar were pure gold together. The sound is so big that it almost hurts to listen to.”

Lately, Isbell has been on a Dire Straits jag, and he channels his inner Mark Knopfler on the sinuous, super-vibey track Overseas.

“I got to meet Mark right before we started recording,” he says. “I’m a big fan, and I was thrilled when he told me he liked my music. So I think his guitar ethos was in my head when we cut that song. That’s all live tape echo on my solo. I’m pretty proud of that.”

On other cuts, like the spooky yet urgent What I’ve Done to Help and the heartbreakingly earnest Letting You Go, Isbell and co-guitarist Sadler Vaden hit upon the perfect blend of acoustics and electrics.

“A lot of that just comes from the two of us listening to records and knowing what sounds right,” he notes. “We pick albums apart and discuss them – we’re real students of recording.”

Probing deeper into his guitar relationship with Sadler, Isbell says, “I don’t look upon us as rhythm or lead player; it’s just whoever comes up with something plays it. Sadler just always knows what to do, and he finds a way to complement whatever I’m doing.

“Sometimes he plays little fills, but other times he and I just play the same boneheaded chord together and it sounds right. When it works, we don’t question it.”