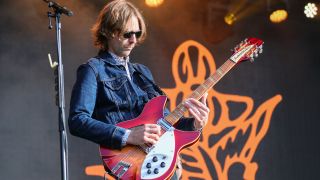 Sadler Vaden is comfortable with both sides of the spotlight. Before his stint as lead guitarist for Drivin’ N Cryin’ and his current axe gig with Jason Isbell and the 400 Unit, the South Carolina-born picker fronted power trio Leslie. “People always ask me, ‘Was it hard to go from being the star to being a sideman?’” he says.

“But I never looked at it that way. I love songs. I love being part of the creative process. So I have no ego about playing someone else’s music, as long as it’s great.”

Lately, Vaden has been showing off his own songwriting abilities. His 2016 eponymous debut solo album was a hook-filled set that offered nods to influences such as Joe Walsh, Oasis, the Who and Tom Petty, and his just-released follow-up, Anybody Out There?, delivers widescreen melodies, full-bodied guitar crunch and a production sheen that mixes garage-rock energy with 21st-century polish.

“I’m of two minds when it comes to records,” Vaden says. “I definitely love raw rock ‘n’ roll, and you can’t beat the Stooges for that sort of thing. But I’m also a big fan of Tom Petty’s Wildflowers. That’s a beautiful album that definitely feels produced. So I try to ride the balance. Too much grit can wear your ears out, but you don’t want it to sound too slick. It’s a fine line to ride, but I think I got it just right.”

Anybody Out There? positively drips with Vaden’s sparky riffs and melodious solos. The raucous lead single Next to You features a vibrant lead run reminiscent of Mike Campbell’s shimmering soloing style, and the anthemic Tried and True sees the lead performer ripping a raga-like 12-string run straight out of Roger McGuinn’s playbook.

“Some guys downplay their influences, but I wear them right on my sleeve,” Vaden says. “I’m a product of the people I’ve listened to, so I’m not saying I’m reinventing the wheel or anything.

"Just like my heroes updated what they grew up on, I’m continuing that tradition. This album is me saying, ‘I love this music so much that I want to make my own version of it.’”