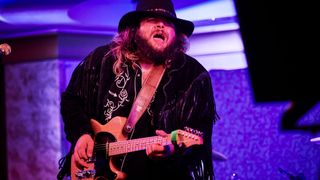 Back in August, we had one of those rare hallelujah moments where you get truly knocked off your feet by a player you’d never encountered before. Jonathon Long, a 31 year old from Baton Rouge, Louisiana, may not be a household name quite yet, but his effortless command of country, jazz and blues licks recalls greats such as Danny Gatton - not a comparison we use lightly.

When we caught up with Jonathon last summer, he was playing on a blues-themed cruise hosted by Joe Bonamassa. But he’s about as far from the blues-rock cookie-cutter as can be, citing Johnny A, Tony Rice and Guthrie Govan as equally important influences in his rich inner musical landscape.

He’s also got huge chops, which he delivers with the passion of a travelling preacher. We joined the charismatic Southern Suhr-slinger to get to the roots of his eclectic and electrifying style.

Louisiana is a state with a lot of music history. How did you make a name for yourself on that scene?

“I got pulled out of the music store when I was 10 or 11 years old by this lady named Dixie Rose in the town I was living in and she said, ‘You’re great, you need to come and be heard.’ So I played with her a couple of years and then eventually she introduced me to the blues jam at Swamp Mama’s in Baton Rouge, Louisiana.

"And I would just go hear these old players like Kenny Neal and Larry Garner, and Raful Neal was still alive. Just old souls and just good players.

“So the local guys at the blues jam that were out there touring and doing it were my biggest influences early on, in the beginning. I just knew that I could feel that it had to be real. You could get up there and try to imitate it, but everybody could see right through you if you just got up there and you tried to act it. You had to really feel it and be about it."

“And I could tell those people, those guys who were my early influences, were truly about what they’re singing and playing, and I wanted to feel that one day. I wanted to figure out a way to get into that sort of spirit, just that soul. Almost like, even if everything was going great and I was born a rich kid with a silver spoon in my mouth - which I wasn’t, but if I was - I would still want to find the blues. Do you know what I’m saying?

"I would want to feel just the struggle. That way you could really live it and be it. So I think that’s important. “You know, the blues comes from African-American culture and the spirituals and the gospel. There are a lot of people that look past the history of it and they don’t give enough credit to where it comes from.

"I say that to say there are a lot of people that try to imitate it, but you’ve just got to feel it and have your own voice with it.”

"Ground Zero Blues Club is Morgan Freeman’s spot [in Clarksdale, Mississippi], then you’ve got Teddy’s and then there are a couple of them around the Clarksdale area and stuff. But there are not many real juke joints left where it’s a shady little hole in the wall with a low ceiling and old memorabilia hanging around.

“Teddy still spins records. He don’t have a jukebox or have a CD player, none of that. He still spins original records and vinyls in a record booth and he’ll turn down the radio and talk, ‘Hey, pretty ladies, go ahead and get out there and shake that thing.’ And he’ll turn it down and kind of DJ, but he plays real records.

"A juke-joint party is like a backyard party. It’s like being there with your family and friends and really getting in the groove.”

You’re a very eclectic player - your guitar work spans everything from country to jazz. Who are your touchstones when it comes to taste, technique and feel?

“Oh, there’s a ton of them I really like, but I’ll name three: Michael Landau, Robben Ford and... I’m just going to name a badass - Guthrie Govan. I mean, Guthrie, he’s fast but he can be as tasteful, he can play any style of music, just as good as anybody else.

"And then Robben’s tone is just unmatched... just the way that he approaches licks. And then with Michael Landau, there are no words.”

Robben and Michael are players that make great use of clear but sustaining tone that has its roots in Fender and Dumble amps. Are you similar when it comes to tone?

“Oh, yes. With those guys everything is clear as a bell, even when it’s got a little overdrive on it, it’s just crystal clear. But that has a lot to do with their hand strength and their approach to attacking a note as well. Personally, I like a lot of headroom and for the note to be clear as a bell.

"I recently got an endorsement for Komet Amplification and I’ve been using their Concorde amp. It’s like a Trainwreck, basically, but it can get real clean and crystal clear. And then on the Fast mode it has what they call instant response or instant touch response.

"When you hit something it is there and it doesn’t hide mistakes. It’s not one of these amps that’s just a pillow that hides mistakes and all that, it’s a player’s amp. I like an amp to cut through and be clear and not have too much mush on top of the note, you know?

"A guitar player always is chasing tone. I recently met a guy back home named Tracy Farmer, he had a good job and retired young and has a bunch of money. And he spent countless dollars on any pedal and any amp that you can imagine but he came down to Two-Rock and Komet.

"He also turned me on to that stuff and then stuff like [pedal maker] Vemuram and the original Klon and that sort of thing. Just good stuff."

The Vemuram stuff is interesting. Do you use their pedals?

“I use the Shanks ODS-1, the John Shanks overdrive, and it is killer. I’m using my friend’s KTR on this tour and, man, I’ve been wanting to buy an original Klon. But the Shanks does that sort of thing so well that it’s almost not worth the $1,700 investment in a real Klon.

Guitar-wise, you recently switched from big Gibson-style semis to a Tele-style Suhr. How come?

“Honestly, it’s just easier to carry when you’re on the road. It’s lighter and it’s less circumference of a guitar. It’s also tougher. You know, if this boat broke down I’d use it as a paddle. I mean, they’re virtually indestructible: you can bring a Tele on the road and even if the side of the neck pocket cracks or something weird happens, you can always keep it together and jam.

"It’s an indestructible workhorse, and I just figure it’s light - this one’s only 6.1lbs - and there are less things could go wrong.”

Did you have to adapt your style in any way, due to the switch from humbuckers and a shorter scale length?

“Not really. I mean, I’m not really a theory player, I just play. So I tend to pick up any guitar and just do my thing on it. I’ve played acoustics with actions so high you could look under them. Just like any real player, you can pick up anything and make music.”

Are you a Danny Gatton fan at all? It’s tempting to draw parallels between your approach to playing and his...

“A little bit. I’m a fan of everybody. I like Spanky Alford a lot. So I mix the neo-soul chords and stuff with the sweeping and finger tapping and blues, kinda like Eric Gales does. But then I also every now and then will throw in some Tony Rice or Danny Gatton kind of chicken picking stuff. I kind of melt those three things together, you know? But I came up playing blues.”

You’ve got scary technical chops but also great taste - how do you keep the balance?

“Dexterity is good to work on, you try to keep yourself in shape so you don’t make yourself look like a fool doing what you’re supposed to know how to do. Like a magician trying to do sleight of hand with no fluffs and you don’t want nobody to see what’s going on.

“On the other hand, my mom tells me all the time, ‘You know, you’re sitting there playing for us, but you just noodle.’ She don’t use that term, but you know what I mean. ‘You’re just playing whatever, why don’t you sing us a song?’

"So, yes, I find myself doing that all the time where I’ll be practicing or trying to figure out somebody’s licks. I have to stop myself and say, ‘You know what? You need to write a tune. Or do something productive that’s going to go on something or that’s going to progress me.’”

You seem to immerse yourself deep in the music when you’re playing live...

“Oh, yes - I don’t find myself again until after the show is over with and then I can get back to reality. It doesn’t matter if you’re playing for five people or 5,000 people, it’s the best high - it’s better than any drug.

"It’s an honor and a blessing and a privilege to be able to stand up there and do that and have people that will listen to you. You get lost and you get carried away, and I think that’s what makes most of us tend to overplay.

“As guitarists we’ll go hear somebody and we’re like, ‘Oh, they’re overplaying, whatever.’ But then we’ll get up there and do the same thing! It’s just being in the moment and it’s so intense that sometimes you just lose perspective of the current reality. You space off into your own zone.

"I know it’s a cliché, but music speaks to the artist who wrote it as they’re playing it, just as much as it speaks to the audience. I think as long as you’re on the ‘soul’ side of things, I think you can stay connected and really feel it.”

“I think it’s important to just be yourself and do you and don’t worry about being the baddest and the best person out there. Johnny A is one of the most tasteful players in the world, you’re never going to hear him shred a solo like Steve Vai, but that doesn’t mean that he’s not as good as Steve Vai. That doesn’t mean that he’s not the same calibre of player, you know what I’m saying?