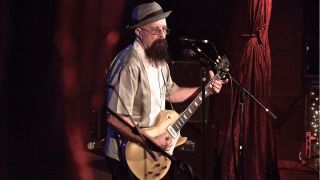 Junior Watson's swing-steeped playing style is a living link to the pre-rock era, when six-stringers like Charlie Christian, T-Bone Walker and Tiny Grimes were paving the way for the rock ‘n’ roll explosion of the 1950s.

That immediately recognizable style is showcased on Watson’s new LP, Nothin’ to It But to Do It (Little Village Foundation), his fifth album as a leader.

It’s full of swingin’ blues executed with Watson’s fat tone, trademark humor and penchant for surprising listeners - like a ska version of the Duke Ellington swing standard “Caravan” - along with doses of string-weeping “deep” blues.

Watson started playing surf music as a grade-schooler in Tulari, California. His first blues gig was backing harmonica player Gary Smith in the Bay Area, followed by a soul-music gig. Then he spent a decade touring with harpist Rod Piazza and his Mighty Flyers, followed by a 10-year stint with a post-Woodstock version of Canned Heat.

Starting in 1999, he led his own band for a few years before going freelance so he could spend more time closer to home.

“I was tired of traveling around in a van,” he says. Watson’s guitar solos can be surprising, but they’re not random; they’re based on a deep knowledge of chords. “Most guys just want to solo right off the bat, but I learned chords first,” he says. “I bought a chord book and could teach anybody alternatives to playing barre chords, even before I figured out what blues was.”

While he doesn’t approach household-name status - even among blues fanatics - many of Watson’s biggest fans are other guitarists, players who appreciate his knack for avoiding blues-guitar cliches - or twisting them into something new.

“I never wanted to play all the chestnuts; even as a kid I was always trying to find something different, something nobody had ever heard.”

His advice for others who want to blaze their own guitar path? “Just try to be your own person. Dive into the music and really get a good scope on everything; don’t just listen to what’s new. Learn the history. Starting out, everybody goes for the blues Kings – B.B., Freddie and Albert. But go beyond that; listen to what they listened to.”