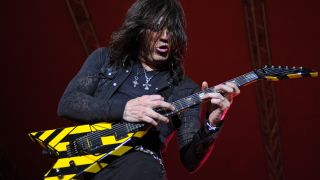 Michael Sweet is best known as the frontman for Stryper, the band that invented the concept of Christian metal at a time when, ironically, rock ’n’ roll was at its most hedonistic, the early Eighties.

Cynics dismissed the band’s approach as a publicity-seeking gimmick, although Sweet is quick to counter that one: “Why would we choose Christian rock to try to be successful? Surely that would be a terrible stunt when you saw the success of the bands who were clearly not embracing Christianity.”

Stryper enjoyed a run of successful albums until splitting in 1992. Sweet then embarked on a similarly successful solo career and reunited with Stryper in 2003, continuing to record and tour under both banners. His brand-new release, Ten, is, in fact, his 10th solo album.

While previous Sweet solo albums have been quite diverse, Ten is a pure metal album with searing shredding scorched across every track by an all-star cast of guitar wizards. Although there are a couple of cuts with a Christian slant, overall the album is a straight-ahead celebration of the power of unabashed rock ’n’ roll that recalls the heyday of metal, when an astounding guitar solo was de rigueur on every track.

What differentiates a Michael Sweet album from a Stryper album?

"People have particularly picked up on the lead-off track from the album, Better Part of Me, and said it sounds like Stryper. I don’t see that as a negative; in fact, I view it as a positive.

"I am the singer, writer and producer for Stryper, so there’s always going to be similarities in flavors that taste like Stryper. I’m not going to try to escape that. When I make solo albums, I experiment and branch out a little more. That’s the key difference."

Given that you’re continuing to maintain the two strands to your career, are you writing specifically for each project?

"Once I know what project is coming next, I start writing and I write a song every day. I don’t write differently for different projects. Once I have the number of songs required, I’m done.

"I’ve gotten to the point in my life where I know what I like, I know what’s bad and what the fans are gonna like or not like. I don’t want to sound egotistical when I say this as I’m not, but I know what I’m doing."

What’s your success rate of keepers to rejects when you start that songwriting process for an album?

"I’ll come up with a guitar riff first; it always starts there. Then I’ll create a drum groove that fits that riff that I really like. Then I take it on from there. My wife is an excellent judge of music. She will hear it and go 'Meh' or 'Wow, I really like that.'

"The 'Meh' songs are usually the ones that I thought myself weren’t quite working. They might then get put on a shelf for later. Usually whatever is coming out of me at that point is working and I’m liking how it’s making me feel."

Ten features a different guitarist on each track. Was that always the intention when you started the album, or did it evolve during the recording process?

"I shot myself in the foot to some degree as I’ve been trying to make people understand that I’ve been a guitar player for a long time. I started playing when I was 5, way before I was ever a singer.

"On my last solo album, [2016’s] One Sided War, as I was working on the guitar solos, I quickly realized that when I’m playing all the solos, it will instantly be much more Stryper sounding.

"I brought Joel Hoekstra and Ethan Brosh to record some solos for that album to change it up a bit. When I started to prepare Ten, I took it a step further, and all of my favorite guitar players right now - including Joel and Ethan - are on the album."

Did you track all the rhythm guitar parts?

"I did everything - the rhythm parts, overdubs, acoustic guitars. I call it the 'ear candy.' There are two tracks where I don’t play any guitar at all, Never Alone and When Love Is Hated.

"Those were cowritten with Joel Hoekstra, who played all the guitars. It was basically to show people what Joel and I can do together, as we will be doing an album together at some point."

The album as a whole is a total shred-fest, isn’t it?

"Yeah. I’ve got Gus G, Jeff Loomis, Todd La Torre, Tracii Guns and Will Hunt - and that’s not even the half of it. The only solo that is just terrible that didn’t work out is the ballad Let It Be Love. This guy called Michael Sweet did the solo on that one [Laughs]."

I think the solo on that track is probably the most memorable. It’s such a singable solo, where every note really counts.

"Here’s the thing about my playing. The album did become a shred-fest on the whole, but I’m more of a melodic player. I try to write a composed solo that people can remember and actually sing. My list of favorite players from the Seventies and Eighties are all players who make a really strong melodic statement."

I was watching a clip of you on YouTube; you were writing lyrics and you were left-handed, yet I notice that you play guitar right-handed. Was that a conscious decision?

"I use my left hand to write, brush my teeth and pick my nose! That’s about it, everything else is right-handed. My dad taught me how to play on a Gibson 12-string Jumbo acoustic. It was three times the size of me at 5 years old. It was right-handed and I didn’t really have a choice about being left or right-handed for the guitar.

"It did feel awkward at first, but I think if I had the opportunity to play a left-handed guitar at the time, I would have probably been a left-handed guitarist. You have many more choices in terms of guitar as a right-handed player so I’m glad that I stuck with it in the end."

I assume your next album will be a Stryper album after this solo release.

"The plans are to start right after the first of the year; I’ll write the album and we’ll do pre-production in the studio in my house. We’ll learn the songs, then we’ll go in the recording studio and track all the basics in about two weeks. That will be everything except for lead vocals, solos and mixing, which is pretty fast. It’s about a song a day."

You recently stated that in Stryper you’re all taking home approximately $7,000 to $10,000 per album. I think that surprised people.

"I think people were shocked by that. Most people who criticize rock bands, thinking they’re wealthy don’t have a clue. In the old days we’d get say $200K to $400K to make an album and we’d spend most of it on the recording and going out to eat every night.

"We’d make very little from that process for ourselves. Nowadays if we get $100K to make an album, we’ll try to be economical and have some left over to put away for a rainy day.

"Each individual guy doesn’t make that much from the record, and that’s one album every few years. We make most of our money - and it’s still not a lot - by touring and merchandise. We’re certainly not rolling in the money, though, and we work very hard for what we get. I think people would be very surprised by how much most bands are making these days."

You’ve discussed seeing Elvis Presley live as a kid. Was that a big moment?

"Yeah. It was about 1974. I was in awe, but I didn’t realize until much later in life how much of an inspiration he was to me. I’ll sometimes see myself do moves on stage and think, gosh, that came right out of the Elvis handbook.

"Elvis played a big role in my life, and certainly through my father. My dad was a musician, he loved Elvis and he even looked like Elvis - and I grew up around that. None of us would be sitting around talking about rock ’n’ roll today if it wasn’t for Elvis."