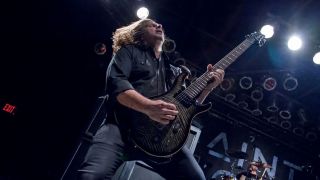 Mike Mushok’s career is having a busy-as-hell second act, and the guitarist couldn’t be happier.

Since his long-running hard-rock outfit Staind went on hiatus in 2012 (they’ve since reunited to play one-off shows over the years, most recently at Aftershock festival last October), Mushok’s life has been a whirlwind filled with raising his 13-year-old twins, running his virtual-reality music-video production company, The VR Sessions, creating custom music for clients like ESPN and cranking out riff-heavy bangers with ex-Three Days Grace singer Adam Gontier in their supergroup Saint Asonia.

“It’s a juggling act between all these different things to try and make it work,” says the guitarist with a laugh. During the recording of 2019’s Flawed Design - Saint Asonia’s hard-hitting sophomore album that features a guest spot by Godsmack vocalist Sully Erna - that hustle meant a lot of commuting, and not much sleep.

“We had a producer that was in upstate New York,” Mushok tells Guitar World from his home in Connecticut. “He was an hour and 45 minutes from me. I’d drive back and forth. There’d be days I’d leave at 6:30 in the morning, work for six hours and be [back] at the baseball game to help coach [my son] that afternoon.”

When he wasn’t tracking, or at the Little League field, Mushok often could be found at the stable championing his daughter’s extracurricular activity: showing horses.

The guitarist had to get creative when it came time to write for Flawed Design. Whether he was sneaking off to his home studio after the kids went to bed or blocking out time to woodshed between the day’s other activities, one thing was consistent: he’d always record his sessions.

“Whenever I’m there, I make sure Pro Tools is on,” Mushok says. “I have a session called Ideas and I just put down different tracks. It’s having a library and catalog of these ideas that I can go back and listen to that might spark something later on. There’s a lot of idea folders… [Laughs]”

Due to some ups and downs between Saint Asonia’s self-titled debut in 2015 and the Flawed Design sessions - namely Gontier becoming a first-time father and subsequently confronting his addiction issues and getting sober (“He’s really in a good place,” says Mushok, “and he worked hard to get there.”), as well as the line-up changes of new bassist Cale Gontier [Art of Dying] and drummer Sal Giancarelli [Staind] - Mushok had ample time to compile a hefty library of riffs that would eventually make their way onto the new record.

Along with the collab with Erna, The Hunted, Flawed Design is made up of 11 solid alt-rock cuts that run the gamut from emotional crushers (The Fallen, Gontier’s tribute to Chester Bennington, Chris Cornell and Gord Downie) to epic workouts (This August Day).

To bring his parts to life, Mushok relied on his signature PRS SE baritones and baritone seven-strings, a PRS McCarty Hollowbody and various Les Pauls plugged into an array of amps, including his Diezel VH4, PRS Archon 100 and Tremonti, Bogners and old Marshall JCM800s.

The guitarist also took inspiration from classic shredders like Tony MacAlpine and Neal Schon. He points to the latter’s playing, particularly in Journey, as providing a great example of musical “restraint.”

Mushok is eager to take Saint Asonia’s new songs on the road in 2020. The guitarist is also gearing up for more shows with Staind in the spring (including Epicenter, Welcome to Rockville and Sonic Temple Art & Music Festival) and reports he’s open to the possibility of writing new music with singer Aaron Lewis and the rest of the hard-rock crew.

“As far as new [Staind] material… I’ve got my library of stuff and… if we can figure out if we can do it, cool. That was a band I started when I got outta college. All that hard work we did enabled me to do all the other stuff I’m doing… I’m very thankful and very proud about what we’ve done, and we’ll see what happens in the future.”