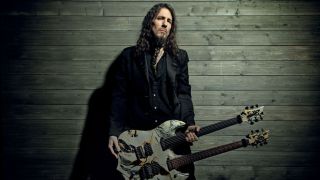 As Sons of Apollo take on a new decade and release their sophomore album, MMXX (pronounced “2020”), guitarist Ron “Bumblefoot” Thal feels fortunate for another opportunity to embrace his prog-rock roots and tap into what he calls his “inner [Allan] Holdsworth.”

Thal started his 30-plus-year career in the prog-rock realm; in the August 1989 issue of Guitar Player, Shrapnel Records owner Mike Varney called Thal’s demo tape “among the most impressive I’ve ever received. It contains elements of classical, blues and jazz and at times reminds me of Frank Zappa.”

Thal’s prog forays expanded with his '90s solo albums Adventures of Bumblefoot and Hermit, followed by his Bumblefoot project, which started in 1998. And, although Thal eventually segued into more straight-ahead rock projects such as Guns N’ Roses, Sons of Apollo’s formula of a “hard rock foundation with a lot of prog stuff built on top of it” allows him the chance to be more daring and to craft crazy and weird guitar arrangements.

Take Imaginary Books, which sounds like “bugs crawling all over you,” as Thal puts it. “Getting back into a progressive situation, it re-lit that fire in me, and I had a chance where I could play a little more outside and do things that wouldn’t have been appropriate for straighter music,” he says. “I think I forgot how much I loved playing progressive music.”

“At this point, we have written together, and we have recorded together, and we have toured together - we've spent a year in the trenches together,” Thal confides in us. “It was a more comfortable process where we knew what to expect; we had our rhythm down as far as how we do things, because we’ve been through it before with the first album.”

The band is at their most ambitious on the wide-ranging 16-minute New World Today, featuring one distinctive section full of Thal’s ideas self-referenced as “Adventures in Bumbleland”.

“Piece by piece, it’s more like a Rush 2112-style, album-side thing where there’s a bunch of songs - or I guess you could say a medley,” Thal concludes.

The album serves as further proof that the band is for real and more than a one-and-done side project.