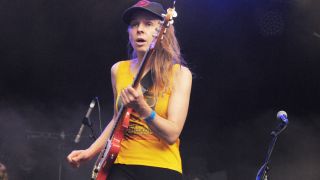 Having been involved in a vast range of musical projects from Ghanaian tribal to punk-jazz, it's safe to say that Orange amps endorsee Ruth Goller knows exactly what she's talking about when it comes to the bass guitar.

She recently sat down with Bass Player to discuss her latest projects, the challenges of playing non-western music live and her go-to gear.

You have four different projects on the go at the moment, Ruth. Talk us through them.

"Well, I picked a few bands this year that I want to focus on. I’ve been playing a lot with a band called Vula Viel. The bandleader is Bex Burch: she plays the gyil, which is a xylophone-type instrument from Ghana. Rhythmically, it’s very difficult. The music comes from the Dagaare tribe in the north of the country.

"Bex lived there for about five years, and learned how to build the instrument and to play it. They play funeral music where they sit around in a circle and play for 24 to 48 hours, non-stop."

Explain the music for us.

"It’s a very strict form of music, so it’s not like jamming on two bars or something that we Westerners can easily understand. There are very long forms of different sounds, as she calls them. She doesn’t talk in chords; she talks in three-note sounds, which become chords in my head that I can relate to.

"The other difficult thing is that her instrument, the gyil, is a G major pentatonic, so A and B sound very similar because they share some of the notes. It’s not like in jazz harmony, where you’ve got a standard with obvious key changes that your ear can follow, even if you lose concentration for a second.

"With this music, because the parts sound so similar, you really have to know where you are all the time, and if you get lost, it’s almost impossible to get back in."

"At the beginning, I thought ‘My God, how am I ever going to be able to learn this?’, because I’m not a quick learner. It takes me a long time to internalise something – but at some point it really happened. There was one tune that we’d been playing, and I remember that I said to her, 'Bex, I’m never going to be able to do this without looking at a chart'. But now, two or three years later, I’ve gotten to a point where I’ve learned it. Somehow, in my head, I can feel the longer form."

Is it challenging live?

"Yes, but at gigs I catch myself not concentrating but still knowing where I am. That’s the point where it starts feeling really free and you’re able to make music with it, maybe superimposing different bass notes. She’s in G major pentatonic, so after an hour of playing that scale, you feel that you want a different bass note. That obviously creates a different harmonic sound, which is obviously not traditional because they don’t have that, but then again, our band isn’t really traditional in that sense.

"We have electric bass and a drum kit, so it’s not traditional Dagaare funeral music, obviously. She writes her own music based on those structures, and we have an album out called What’s Not Enough About That? in February.

In the column that you write for us, you sometimes mention that a lot of your playing comes from not worrying too much about boundaries.

"Exactly. I suppose it’s just improvised music. I don’t play in a rock band that plays the same thing every day. I’ve done that before, but I didn’t really enjoy it. It wasn’t my cup of tea. So that’s definitely the goal with anything I do."

You also play in Let Spin.

"We’re just finishing our new album. The music sounds great and I’m really excited about it. It will be out next year; springtime, I think. I’m really enjoying doing their gigs."

Tell me what your go-to gear is. Are you still an Orange endorser?

"Yeah, I have an Orange MKIII. It’s really big, that amp, and I literally can’t lift it unless someone’s there to help, so unless I’m playing a huge venue, I don’t take it out, as much as I like it. I’ve also got an Ampeg Rocket Bass B-100R combo, which has lasted for 20 years. It fell from a five-metre height out of the van one day, straight down, and you can’t quite recognise what it is any more, if you look at it, but it has never broken. That is literally the best thing that Ampeg ever made. I love that amp. I use it all the time."

What about bass guitars?

"I’ve got a Fender Mustang. In fact, I’ve got two Mustangs. I’ve haven’t got a lot of basses, but that’s my thing. They put it out a few years ago with the two small pickups on it. A friend of mine was selling a version of this one with the humbucker pickup on it, and I’ve just started using that one as well.

"I really like it, it’s great, but my regular Mustang is still my favourite one because I know exactly what to do with it in any kind of situation. I know my sound, and it’s simple. I like simple things. It’s got two knobs and I know what to do with them. I’ve been using the humbucker one with my other band, Melt Yourself Down."

Is that band ongoing as well?

"Yes – we got signed to Decca, which is really exciting. The album’s coming out, I think, next year. We’ve just started doing gigs, and I’m sure around the album release we’re going to do some more gigs then as well. The people from the label are really into it."

How much time do you spend playing double bass as opposed to bass guitar?

"I definitely play more electric bass at the moment. I don’t really do a lot of jazz gigs on double bass any more, and in fact I’ve never really been a proper bebop double bass player. I did some gigs like that, but not like someone that does it every night."

For bass guitar, do you use effects pedals?

"Yes, I use the EHX Freeze pedal a lot, and then I have the Malekko B:Assmaster for distortion. The one I have might be a bit broken, because it’s very temperamental, but I like it because I know what comes out of it. I also have a Boss reverb/delay pedal, which has a few settings that I feel comfortable with."

You also have a solo band, Skylla. Do you use those effects there too?

"With my band I use all of those things, plus a Boss harmonizer pedal. You can add high intervals onto whatever you’re playing, so when you play harmonics, you get this really high-pitched kind of sound. I always use a SansAmp too. I’m a huge fan of it. I use it all the time, wherever I am."

Is the SansAmp is also useful as a DI?

"Yeah. I like having an amp because I can usually hear myself better. Even if you have a monitor, it’s never really the same thing, so the SansAmp means that when I use a different amp, I can still sound like myself. I know it’s never going to sound bad. I don’t use in-ears: when I have, I feel quite removed. I prefer having a monitor."

How did Skylla start?

"Kit Downes, my husband, started a series called This Is Our Music, where he asked 15 people or so every month – mainly just friends of his, or people whose music he liked – to send him some music every month that hadn’t been released before. It could have been something they recorded in their bedroom, or at a gig, and he would put it out.

"He asked me to be part of it, so I sat down and made a track, just electric bass and layers of vocals on top of it. I really liked it and so did he, so the next month I did something in a similar vein, mainly playing harmonics and tuning strings differently. If you use the same tunings, you get similar sounds all the time, so by detuning differently every month I ended up with a completely different sound.

"I would detune the strings a quarter-tone flat or a quarter-tone sharp. After a while your ear gets used to it and doesn’t hear it as out of tune. I did 12 tunes and realised, ‘I’ve got a record here’."

How does that translate to a live show?

"A German jazz festival got in touch and said, 'We’ve really been liking your tunes every month. Do you want to come and do it live at our festival in Cologne?' I said yes, and asked two singers, Alice Grant and Lauren Kinsella, if they’d be up for doing it. They liked the music and agreed, so I rearranged it for two lead vocals plus me on bass. We did that gig in Cologne and it just felt right. We’ve got a few gigs now and the album’s finished. Kit’s producing it, and next year I’m going to put it out."

Having your life based on music which you love is a huge achievement.

"Thank you. I’m a bit of a floater in life, but things come to me, and then they somehow work without me planning too much. I had so much work this year that I didn’t have to worry about having to teach and stuff. If I’m doing enough gigs to be able to live, then for me, that’s enough. I feel very lucky."