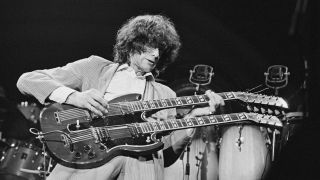 What makes for a great 12-string guitar song as opposed to a great song that just happens to have a 12-string guitar somewhere on it? Let's face it, if Led Zeppelin's Stairway to Heaven had a ukulele on it, it would immediately be in the running for Greatest Ukulele Song of All Time.

That being said, we looked at not only the legacy of the song but how prevalent 12-string guitar is in the song and how influential the song would be in inspiring others to pick up their 12-strings.

Without the 1964 Beatles film A Hard Day's Night, the Byrds might not have existed as you now know them (assuming you know them - and you should know them), and without Stairway to Heaven, the double-neck guitar might be sitting in a museum as a one-time oddity produced by Gibson. So what song will we crown as the best 12-string guitar song of all time?

Also, before we get started, we're presenting an "honorable mention" award for Tom Petty's Somewhere Under Heaven, his standalone 2015 single, which proves artists are still writing and recording great 12-string guitar songs in the modern era. The song, which was written by Petty and Mike Campbell, was featured in the Entourage soundtrack in 2015 (but don't hold that against it). It's actually an unreleased song from Petty's Wildflowers sessions.

This song marked one of the most experimental moments in Pantera's catalog, with Dimebag Darrell's dark 12-string guitar part perfectly echoing the song's somber subject matter.

The newest song to make the cut, John Butler's instrumental masterpiece Ocean stands as a fine example of the timeless sound of the 12-string. Keep an ear out for Butler's use of two-hand tapping ala Satriani in Midnight.

Although the 12-string acoustic guitar plays only a supporting role in this ubiquitous folk-rock tune about a nameless equine, it actually plays a major part in its overall sound.

When A Horse With No Name was released, a lot of people thought it was a Neil Young song, which is ironic because it replaced Young's Heart of Gold at the Number 1 spot on the U.S. pop chart.

Most assume it was Dylan himself who played the 12-string here, but it was actually session guitarist Vinnie Bell manning the Danelectro Bellzouki 12-string guitar on this classic cut.

Gordon Lightfoot re-recorded this old Gordon Lightfoot tune for his 1975 compilation album, Gord's Gold, and it's this lush, radio-friendly version that became the hit. While 12-string electric guitars were all the rage in the '60s, 12-string acoustics had taken their place in the '70s; this song is a prime example of that shift.

If ever there was a rock band who had an equally strong handle on menacing drop-D riffs and menacing, introspective acoustic music, it was most certainly Alice In Chains. I Stay Away from Jar of Flies is not only the band's best 12-string moment, but it marks the first track Jerry Cantrell wrote with then-new Alice in Chains bassist Mike Inez.

25. The Hollies - Look Through Any Window

As you'll see, 1965 was a huge year for the electric 12-string guitar. It was big like synthesizers and skinny black ties were big in 1982. You had your Byrds, of course, your Beatles - and your Hollies, who rode the 12-string bandwagon to great heights with this song written by Graham Gouldman and Charles Silverman. That's Tony Hicks on the 12-string, by the way.

Brian May's massive-sounding 12-string acoustic is an integral part of this sci-fi masterpiece, the B-side of You're My Best Friend. It's about a group of astronauts who set out on what they think is a one-year journey, but when they get back, they realize they've been gone for 100 years. They simply don't write Einstein allusions like this anymore.

23. Mahavishnu Orchestra - You Know You Know

It's undeniable that Mahavishnu Orchestra had many fine 12-string moments in their career, but You Know You Know off their first album, The Inner Mounting Flame, stands out as guitarist John McLaughlin's shining moment with the instrument. Fun fact: This song was later sampled by both Mos Def and Massive Attack.

One of only two Chili Peppers songs in 3/4 time, John Frusciante's main 12-string riff in this song was inspired by none other than Jimmy Page.

Jimi Hendrix sitting alone playing blues on a 12-string acoustic guitar is a reminder that, despite all of his distortion and psychedelia, he always felt a strong connection to his roots, including Delta blues. Although he performed and recorded electric, full-band versions of this song (as heard on the Valleys of Neptune album), this version is more stark and disarming.

20. Supertramp - Give a Little Bit

This international hit for Supertramp is a pop masterpiece in the key of D, which, as the Byrds proved a decade-plus earlier, is the 12-stringiest of all the keys. It was written by Roger Hodgson, and a solo Hodgson performance is featured in the video below.

Long before working with the likes of Adrian Belew, Carlos Alomar, Robert Fripp and Stevie Ray Vaughan, Bowie himself manned the 12-string for his 1969 ballad of Maj. Tom. The song was so well-received, the album it appeared on, David Bowie, was renamed after the song before its 1972 reissue.

When Pete Townshend wanted a riff to one-up the Rolling Stones' (I Can't Get No) Satisfaction, he reached for his 12-string. "Substitute" was a top ten hit twice in the U.K., once in 1966 when it was originally released an again 10 years later when it was re-issued. The track found unlikely supporters in the punk rock movement, being covered by both the Sex Pistols and the Ramones.

Although the Byrds were the band that was most associated with the 12-string Rickenbacker in the '60s, their inspiration came from the Beatles. "We went as a group to see A Hard Day’s Night multiple times and were totally taken with the Beatles," said Roger (formerly Jim) McGuinn.

"I liked George Harrison’s Rickenbacker 12, but I couldn’t find one that looked like his with the pointy cutaways, so I bought the blonde 360 model." For a clear, crisp example of the beauty of the guitar's sound, check out the 12-string riff as the song fades.

Maggie May, Rod's Stewart's first hit as a solo performer, starred a striking combination of 12-string acoustic guitar and mandolin. In 2004, Rolling Stone ranked the song at No. 130 on its list of The 500 Greatest Songs of All Time. We like it too.

Half-inspired by Old West Outlaws and half by Bob Seger's Turn the Page, Jon Bon Jovi and Richie Sambora managed to craft arguably the most recognizable acoustic guitar riff of a ballad-heavy era in rock music.

This was one of the first Jagger/Richards compositions - although producer Andrew Loog Oldham is also credited as a writer. Legend has it that ol' Loog Locked Mick and Keith in a room and told them to come out with an original song, period. This is what they came up with, and they gave it to Marianne Faithfull in 1964 before taking a stab at it a year later.

Even though George Harrison had been recording with his 12-string Rickenbacker for a while, with this song, Jim (later Roger) McGuinn showed the world exactly how cool a 12-string guitar could be. Its jangly sound was the perfect partner to Bob Dylan's ethereal lyrics. The 12-string Rick would be an integral part of the Byrds' sound until they disbanded in 1973.

Taken from Rush's 1977 album A Farewell to Kings, Closer to the Heart begins with a majestic-sounding arpeggio picking pattern played by guitarist Alex Lifeson on a 12-string guitar. This song was also Rush's first hit in the U.K. and has been a staple of their live show ever since.

Zakk Wylde's obvious Southern-rock homage in the opening bar gives way to beautiful, descending riff, which anchored Ozzy Osbourne's only solo Top 40 hit. Rest assured there are plenty of Zakk's patented pinch harmonics to go around, but the sound of the 12-string intro is what makes this song instantly recognizable.

9. Boston - More Than a Feeling

A classic rock radio mainstay and one of the most recognizable 12-string guitar intros in all of rock, More Than a Feeling reportedly took Tom Sholz five years to write.

Back when the Traveling Wilburys ruled the airwaves, Tom Petty, a Wilbury himself, adopted the band's thick, acoustic sound for Full Moon Fever, his first solo outing. He also took fellow Wilbury Jeff Lynne along for the ride as co-producer.

This one features 12-string acoustic on the rhythm and a touch of 12-string Rickenbacker on the mini-solo.

6. The Beatles - Ticket to Ride

Yet another one from '65. This tune, with its crisp 12-string Rickenbacker intro, is one of the many highlights from the Beatles' second feature film, Help! Just play an A on the G string, an open E string, a C sharp on the B string, that A again and then an open B string, and you're on your way.

It was a little surprising when SRV turned up on MTV's Unplugged in 1990 with a Guild 12-string, tearing through a slew of Texas Flood tunes, including Pride and Joy, Testify and Rude Mood.

Then again, that's also the year he recorded Life by the Drop on a 12-string. Perhaps he'd stumbled upon something new that he could've put to greater use in the future.

4. Pink Floyd - Wish You Were Here

Recorded to sound like it was being played through an old transistor radio, the 12-string intro of Pink Floyd's Wish You Were Here never fails to evoke a sense of nostalgia.

3. Led Zeppelin - Over the Hills and Far Away

Stairway might be the most revered song on this list, but there's no denying Over The Hills and Far Away as the quintessential 12-string guitar song in Led Zeppelin's catalog. Yes, that Davey Graham was a great guitar player...

Yes, it's Hotel California. What a nice surprise! Admit it: Don Felder's 12-string acoustic guitar intro (and every other note and chord he plays on this song) is, at this point, a part of our collective consciousness.

This song, the ubiquitous soundtrack to 37 trillion barbecues, elevator rides and long trips through Joshua Tree and Yucca Valley, California, at 3 a.m., has never gone away - and probably never will.