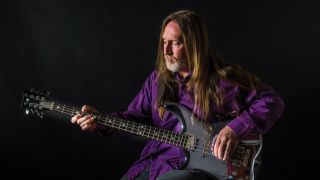 What got you started on bass, Scott?

“Everything about that album tripped me out.  How did they make those sounds? ‘Tomorrow Never Knows’ was otherworldly – it still is. The melodies were normal but the harmonies were mystifying to me, and that really caught my interest – like, how did they know to sing that interval?”

Has that influenced you as a musician?

“Yes. In my solo recordings, I put in all sorts of harmony layers which sound pretty natural to me. I’m pretty lazy about doing it live, though. Fireball Ministry’s albums have quite lush harmonies – and I feel guilty not jumping in there and taking part in that side of things. I get lazy about it because I just want to rock out. I don’t want to wear earplugs, I want to play loud and just concentrate on playing.”

How did you become a Warwick player?

“I was at the NAMM Show in 2012 and bumped into the artist rep for the company I was with. We were out on the floor, and I asked him why he wasn’t in the booth, and he said he’d quit. I’d stuck with them because I really appreciated everything that he’d done for me, so I figured that if he wasn’t around any more, I might as well shop around for a new instrument that was really going to inspire me to play more –because I was getting kind of lazy.”

NAMM’s the right place to shop around.

“Exactly. I went around to so many booths that day – one company who shall remain nameless were very stand-offish! – but when I got to the Warwick booth, everyone was very friendly. I saw the roster on the wall which contained a lot of my favorite players – Bootsy Collins, Lee Sklar, you name it, they were all there.

“The other thing that attracted me to Warwick is that I play very strangely. I play left-handed but the bass is strung right-handed, so I can’t just walk into a store and try a bass. Not one! I noticed that Warwicks had Allen wrench screws on the nut, so I thought that maybe I could swap the nut and the bridge saddles around to suit what I needed.

“Hans-Peter Wilfer [Warwick owner] took my information and a short time after NAMM, I got a phone call from the artist rep. He sent a contract over and we got rolling. I’ve been an endorsee since 2012. If only everything was that easy. Ha ha! The energy that happened right after that was incredible.

“Within a week or two joining Warwick, I got the call from Dave Grohl to do the Sound City soundtrack. Because of the positive energy, everything changed at that moment. It led to me playing in more bands, recording more albums, and getting calls from other artists.”

Were you ever tempted to restring a left-handed bass as you would expect it to be strung?

“No, the damage had already been done by that point. I started playing drums left-handed and had a teacher who insisted I switch to a right-handed playing style. I tried that for a while, but it really screwed me up – I was leading fills with the wrong hand, hitting cymbals with the wrong hand and getting all crossed up, which really confused me.

“So I said I wouldn’t do that with bass, as I had already started playing that way. I figure there are a lot of things that I can’t do, like traditional popping and slapping, but maybe there are other things that I can do that a righty player might not stumble on.”

Tell us about your signature model.

“It’s an eight-string Katana, strung ‘righty’ with the smaller octave strings strung on the bottom, all chrome, and it’s a life-changer. In Fireball Ministry, I find myself plucking octaves to thicken the sound and this bass fills the sound out very well.”

What other gear do you use?

“I’m currently using Ampeg, although I have a whole slew of stuff at home. My main amp is a KT150 Bison head. The tone is incredible and it switches well between vintage and modern. It has a real clarity that punches through but still has the creamy overdrive of an SVT. I’m scared to take it out on the road!

“I have two old SVT heads that I love to death, a 1970 and a 1971. I’ve also got a couple of Hartke heads, a Kilo and an LH1000, as well as rack-mounted SVT 4 and 5 heads that they don’t make anymore. In the studio, I have artists coming in who want tracks re-amped. They ask, ‘Can you put this through the Bison or the Sky Valley amp?’ and I say ‘Sure, just send me some cash’.

“It’s such an easy thing to do, now! Any effects? I’ve been using Darkglass a lot recently, especially the Vintage Ultra, it’s great. I did a NAMM event and they didn’t have an SVT, but having that pedal gave me a juicy tone. It’s been great in the studio too. I have a stock SVT tone and I’ve re-amped it using the pedal. I also use Dean Markley strings, I’ve been with them for nearly 30 years, mainly Blue Steels.”

What keeps the phone ringing?

“I have to thank being on Kyuss’ Welcome To Sky Valley album in 1994. Everything today came from playing on that record, because it made the most impact. After Dave Grohl thought of me, having not done anything for 10 to 15 years, that really opened doors – especially with the Grammy! And then I got a call from [sometime Ozzy Osbourne guitarist] Jake E. Lee.

”They sent me some tracks and there was a great bass track already on there – I didn’t know how to improve it. The engineer said they wanted me to do what I do, in other words noodle all over it, so I did that and sent it to them. I recorded the most fucked-up bass, with an 8x10 cabinet blaring in front of me – lots of bending, long sustains and feedback – and I thought there was no way they would go for it, so I sent them a clean version too.

”But they used the dirty stuff! It all goes back to Sky Valley – I can’t get away from it. The latest project is Louise Patricia Crane’s solo album coming out in May. One of my tracks is with members of my favorite band, the Eden House, along with Jakko from King Crimson, and Ian Anderson from Jethro Tull!

”Louise trusted me beyond being the dumb rock guy, and I got some bass feedback counterpoint in there filtered through a talk box, some vocal harmonies, as well as more traditional bass parts. It’s definitely the highest level production I’ve been a part of – super stoked on this one!”

Do you have basses for different sounds?

”I have two other Warwicks - a Thumb with a lot of midrange growl, and the Katana, which has a beefier, low oomph to it. I use the Katana mainly for Fireball Ministry which is detuned and kind of doomy. I always use medium-gauge strings from 45 to 105, but tuned down to C# standard so the strings are pretty loose and squirrely and I can get huge bends. I tried thicker gauge strings for the low tunings, but it’s too stiff to get those bends, and end up going dead too quickly.”

Do you practice much?

”I don’t tend to practice at home, as my joints suffer a bit. I had an operation on my fretting hand and I don’t have the flexibility that I used to. I should warm up, but I don’t... I do everything wrong!”

What inspires you these days?

”I hardly listen to any music, which may seem strange, but I don’t like getting other people’s music in my head very often. I have a high enough level of internal stimuli – so if I’m out feeding the horses, I have stuff in my head, I have my phone with me and I can record ideas.

”I live out in the country on a 40-acre ranch with 13 horses, 10 dogs, chickens, and all kinds of things. It’s very peaceful, a simple life. I can go for weeks without leaving the house, and then I’ll get dragged out for a fun band thing. When I’m away, I want to be home; and then when I’m home I dream of playing big gigs! It’s worked out to be a pretty good balance.”