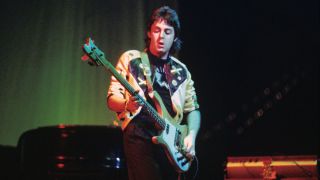 Stylish, classic, packing an unmistakable punch – that’s Bruce Foxton for you. You could say the same for the Rickenbacker 4001 bass, played by the former Jam and Stiff Little Fingers star as well as a huge host of bass heroes, including Paul McCartney, Geddy Lee, Chris Squire and of course Ian ‘Lemmy’ Kilmister.

“It’s probably the most cool-looking bass out there,” Foxton tells us. “The sound is unique... although I never got the Rick-O-Sound bit.”

This, for those not in the know, is simply an extra output jack alongside the standard out, designed to run through dual channel amps or effects. Many 4001 fans use that unique output to separate high and low tones, or to produce two, easily-switchable different sounds.

“The Rickenbacker 4001 is in a league of its own when it comes to tone and construction,” confirms bassist Dave Cookson.

“There’s no other bass like it. It’s very bright and punchy, with a good growl rounding out the tone, and it’s a very comfortable, easy bass to play. I personally own a ’77 and it’s the most treasured bass in my collection.”

The 4001 was introduced in 1961 to replace the Rickenbacker 4000, adding a neck pickup and updated constantly through the '60s, with McCartney an early adopter. Like many low-end heroes, Paul Rafferty of Maxïmo Park has a ‘gentle obsession’ with Macca...

“One of the things I became obsessed with was the bass sound on the 1973 Wings album Band On The Run,” Rafferty explains.

“When I bought my 4001 from a guy who’d inherited it from his bass-playing dad, it was strung with the original flatwounds. When I got it to my rehearsal studio and plugged it in, I couldn’t believe just how Macca-esque it was. The sound was subby and thumpy, but also smooth and resonant when played with fingers. With a plectrum, it had such a chunky attack.”

Foxton initially played an Ibanez 4001 copy, bought courtesy of a girlfriend’s family win on the football pools, but had even better luck when he and Paul Weller were given an endorsement with Wing Music for the real thing.

“There’s nothing magical or mysterious about how I got my sound. I simply plugged in, adjusted a few tone controls and away I went,” says the legendary player.

“I did try putting Fender Precision pickups on at one stage to get more bottom-end, but it didn’t really work due to the difference in body weight and build quality between a Rick and a Precision.”

Max Ludwig is a connoisseur of gear, and considers the Ricky’s place in the pantheon of the bass. “The low-end of the bridge pickup is definitely enough, compared to something like a Jazz,” he explains.

“The flatwounds even out the gnarl of the bass quite nicely. It records really well because it sounds as if it has a built-in compressor. It plays like a dream. The craftmanship of the neck and body surpasses that of my 1977 P-Bass by miles.”

With that, let the arguments begin – and that’s before we even get on to a certain Mr. Kilmister and his ‘unique’ chordal technique…