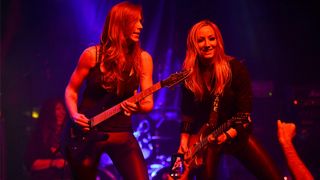 The Rabid praise Iron Maiden elicits from fans and critics isn’t just well-deserved - it’s seemingly infinite. The chapters Maiden have contributed to The Great Book of Metal over the years have, in many ways, defined the genre: from perfecting the dual-guitar harmony assault to consistently elevating the standard for what a heavy metal stage show can (and should) be, Iron Maiden’s importance is hard to overstate.

And any non-believers that dare besmirch the Church of Eddie should consider what an undeniably important band it takes to have a tribute act become a phenomenon in its own right. But then again, the Iron Maidens aren’t just any tribute act.

Forged deep in the fires of Maiden fandom by a cabal of musical athletes that also happen to all be women, the Iron Maidens have developed their own similarly intense fanbase by performing air-tight, note-for-note sets of Maiden’s songs since 2001.

The Iron Maidens have proven to be a force of nature by taking on everything from the band’s deepest cuts to its most beloved hits, all while providing some sorely needed representation for women in the slowly evolving boys’ club of metal.

The Iron Maidens do incredible justice to their heroes’ massive catalog while injecting their own spirit into the affair, which is why they’ve become that rare breed of tribute group that has transcended its place honoring the work of another band to become something legitimately special.

As Iron Maiden troop toward their 45th year waving the flag as one of metal’s vanguard acts, we couldn’t think of anyone better suited to weigh in on the band’s music and legacy than the Iron Maidens’ own team of guitar killers, Courtney Cox (aka Adriana Smith), Nikki Stringfield (aka Davina Murray) and “Hurricane” Nita Strauss (aka Mega Murray), who left her post as the Maidens’ surrogate Dave Murray in 2015 to join Alice Cooper’s band.

Which Maiden songs were the most challenging for you?

Nita Strauss: "Caught Somewhere in Time was the only song that ever gave me trouble, and it’s not the most difficult Maiden song or the most technically over-the-top, but for some reason it always tripped me up.

The 50 best Iron Maiden songs of all time

"I think it was just one of those mental blocks and playing with someone like Courtney, who is such an accurate player and really plays everything note-for-note like the records, I’d try to go for it note-for-note and there was something about the solo that was like rubbing your belly and patting your head for me. I love watching videos of them play it now because they really nail it now!"

Nikki Stringfield: "I don’t know if any are very difficult at this point because we play some staples night after night. The most challenging for me right now is The Clansman, which is one of the newest ones we’ve added to the set. It’s got a lot of changes and up-and-down tempos, and we do the Rock in Rio version, so it’s super long. Fun, though!"

Courtney Cox: "It’s not really that they’re challenging as individual songs - it’s playing the catalog for two hours straight every night. If I had to pick a song that I really had to review before going on stage, it’d be Alexander the Great because it’s like 15 minutes long."

What’s your favorite Maiden song to play and why?

Strauss: "The song I always looked forward to the most was Fear of the Dark because it always gets the most incredible audience reaction. Hearing the crowd singing along to the guitar intro from Fear of the Dark - especially when we would play big festivals in South America to 20,000 people - is incredible.

"To have the experience of playing that song and hearing a crowd that size singing along to a guitar part was such an honor. For a tribute band to experience that feels like being some small part of the Iron Maiden experience. I have chills just talking to you about it right now.

"I’ve actually given this a lot of thought and it’s bizarre because it’s not an easy melody; it’s kind of high, it’s kind of complex, it doesn’t really repeat itself until the whole phrase comes back around. There’s just something about that melody that people latch onto, and it was just nuts to be a part of that."

Stringfield: "My favorite is Powerslave. Dave has two solos in that song and they’re both a bit slower than what he usually does. In most of his solos, Dave does that really fast, fluid legato thing with all kinds of hammer-ons and pull-offs, but the solos in Powerslave are bluesy, feely solos and they kick in so powerfully.

"I also love playing The Clairvoyant because that solo is a precision one, and it’s fast, fun and catchy."

Cox: "I’d say Sea of Madness from Somewhere in Time because I love the tone from that era, with all of the chorus and delay. Still Life would be another one because I love that solo and, again, Adrian’s guitar tone on that record is amazing. Getting their tones is a big part of it; I really try to dial in the mids the right way."

What do you find most remarkable about Iron Maiden’s guitar work?

Strauss: "I think the coolest thing about Iron Maiden’s twin - now triple - guitar attack is how different Adrian, Dave and Janick [Gers] are as players. There couldn’t be three more different guitar players in the world of rock, but there’s just something about those three guys that works so incredibly well together.

"Without Dave and Adrian, there is no classic Maiden sound. You need one to offset the other, regardless of how differently they play."

Stringfield: "It’s funny because I have a lot of people tell me they can’t tell if it’s Dave Murray or Adrian Smith taking a solo, but to me, their styles are so unique and definitive that I instantly know which is which.

"Their respective tones totally fit into the other’s and they just vibe together so well. Adrian’s melodic style and Dave’s bluesy style complement each other perfectly, and you really can’t have one without the other."

Cox: "Dave and Adrian are just so different, but it works. Adrian is more melodic and Dave likes to hang out in a more bluesy, pentatonic kind of place, but they go back and forth so well and it somehow meshes so well. Even if it’s a bit sloppy, it works.

"To this day, I’m still trying to figure out how to do that in my own songs. The formula between the two of them is something I don’t think anyone’s been able to crack. Aside from maybe Thin Lizzy, no one does harmonies that well."

Do you have any thoughts on Maiden’s legacy and impact as they approach 45 years in the game?

Strauss: "It’s amazing to hear younger bands like Bullet for My Valentine that are so obviously influenced by Iron Maiden.

"Maybe sometimes the younger generation of fans doesn’t know exactly where that harmonized twin-guitar influence came from, but it’s such a huge part of metal’s sound again, and it’s just amazing how far Iron Maiden’s music has transcended through generations, race, sex and genre.

Stringfield: "It’s incredible that they’ve been going for 45 years and they’re still selling out arenas around the world. More and more, you’re seeing young kids at our shows - and their shows. Their music has no limits and no boundaries, and I think it’s going to last forever.

"Eddie is an icon in his own right and you can almost hear the band when you see his image. Not many bands have been able to do something like that."

Cox: "They’re the embodiment of power in music and even beyond the music, just as entertainers. The fact that they still have that huge Eighties stage show is crazy and amazing.

"Most bands today, even if they could afford to do it, I don’t think they could put on a show like Iron Maiden. When you go to see Maiden, you know that on top of the incredible music, you’re going to get a real show and see something amazing.

"The live videos simply blew my mind when I was younger, and it’s what made me want to be a musician. They’re performers and entertainers in the classic sense. And 45 years - god bless ’em!"