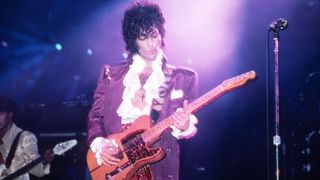 The 1984 film Purple Rain turned Prince into a superstar, although the accompanying album and the strength of the material within also played a big role in his ascension to new heights of fame.

One of the most enduring songs from that album is the opening track, Let’s Go Crazy, which blended heavy electric guitar riffs with new wave synths and drum machines and a dose of funk to deliver a massive hit with irresistible crossover appeal.

Prince recorded the basic tracks for Let’s Go Crazy live with his band the Revolution in an industrial warehouse rehearsal space that was converted into a makeshift recording studio for the sessions.

While the instruments were both miked and recorded direct, there isn’t much separation between instruments, which, combined with a rather dense mix of two guitars, two keyboards, bass, drums and drum machine, makes it somewhat difficult to isolate Prince’s rhythm parts and evaluate his precise guitar tone.

Fortunately, Prince played the song live frequently throughout his career and he even used essentially the same live rig consistently so he could perfectly duplicate his favorite classic sounds.

The core of his rig for this song was a Hohner/H.S. Anderson MadCat Telecaster copy, which varied from a traditional Tele design with its Strat-style single-coil pickups, Strat-style hardtail bridge and maple body. The bridge pickup is also placed closer to the bridge than the bridge pickups on traditional Strat and Tele designs, giving the MadCat a more aggressive treble bite.

Prince relied heavily on Boss pedals for many of his most distinctive guitar tones, played here through a Mesa/Boogie Mark IIB guitar amp set to a clean tone and plugged into a pair of custom Bag End 4x12 cabinets loaded with JBL D120F speakers to maximize headroom and enhance midrange clarity and treble frequencies.

Prince’s distorted tone comes from a Boss DS-1 Distortion pedal, and for the main rhythm riffs and the first solo he also used a Boss OC-2 Octaver to provide deeper bass with buzzing, fuzz-like overtones. For the second solo at the song’s climax, he kicks on a Color-sound Wah and uses a Boss BF-2 Flanger at a few key moments for added drama.

TONE TIP: Set the ME-80’s OD/DS section to Turbo DS, the Mod section to Flanger and the Pedal FX to Wah. An OC-3 set to classic OC-2 mode can be placed in front of the ME-80.