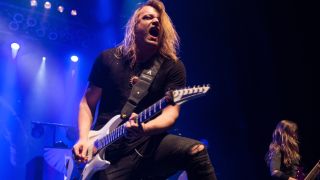 Timo Somers is enjoying one of the busiest years in the guitar galaxy, but you’d be forgiven for not realizing it. Over the course of a career that stretches back to the early 2000s, he’s made a name for himself as a consummate guitarist in the Dutch symphonic metal band Delain.

In January he made a stop in Anaheim, California, to demo several brands at the 2020 NAMM Show; on February 7 Delain dropped a new album, Apocalypse and Chill (Napalm Records), and festival dates are on the horizon.

That’d be enough to keep most musicians busy, but Somers also has a long-in-the-works solo album on his mind and a new album from Arrow Haze, a band he describes as “modern metal, like Periphery meets Pink Floyd.”

Then there’s the EDM-meets-guitar project.

“I have this friend who’s a drummer and he’s also very interested in electronic music and hip-hop," Somers says. "We did a funk single a few years ago. I love electronic music as well, I like hip-hop, I like the beats. But I also like the musicality you get with real instruments.

“He makes the beats at home and then he shows up to my studio and I lay down some different chords and ideas and sounds and it organically becomes something very live but also super EDM and R&B.”

Not that Somers is looking to get out of the metal arena. He joined Delain when he was just 18 and originally his bandmates took care of much of the songwriting. On Apocalypse and Chill, Somers doesn’t just show off his considerable chops but also some of his burgeoning writing and arranging skills.

Of course, you’re not a true guitar hero unless you’ve got a signature model, and, rather than go with a US-based company, Delain stayed true to his low-key profile by designing a guitar with Aristides, a company based in his native Netherlands. He now has his own custom model in six-, seven- and eight-string configurations.

“I’ve been working with them for six or seven years, I was one of their first endorsees,” he says. “The six-string, the pink one, is my go-to signature thing. I had this 1963 Strat that I really like but I missed the spank a little bit, so when Aristides was going to do a signature model I wanted it to be like a '60s Strat but a bit more top-end than the modern ones.”

Somers has all the historical trappings of a guitar hero - the signature axe, a discography you can’t count on all your fingers and toes and tour dates coming out the wazoo. The only thing he’s missing is a household name - at least in the U.S. It’s not a situation that bothers him, but it’s one that could soon change anyway.

“I care more about the music we play and how the people enjoy it than the amount of people that are there,” he says. “But we’ve only been playing in the U.S. five years now. It’s only like once a year we go there, it’s only a month out of the year. I think regarding the little time we’ve spent there it’s going really well. It’s a very small genre but [with] very loyal fans.”