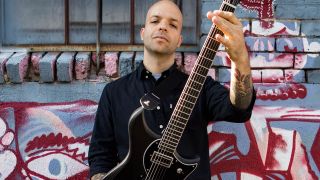 If you’ve ever seen Torche live, you’ll undoubtedly remember just how all-consuming and monolithic their electric guitar tones can be. The Miami fuzz merchants are master sonic sorcerers, their combined efforts converging into a giant wall of noise that might as well have its own gravitational pull.

Fusing elements of alt-rock, sludge and doom with infinitely more uplifting moments of dreamy shoegaze, their sound can often feel multi-layered and dimensional, seductively hypnotic via medium of blunt force.

This year sees the quartet return with their fifth full-length Admission, where founding bass player Jonathan Nuñez has made his recording debut as guitarist following a line-up switch some three years ago. Guitar World catches up with him in the aftermath of his first European tour in this new role...

“It was great and quite extensive,” he laughs, explaining the recent UK leg alone involved 12 dates instead of the usual four or five. “It was great to discover some new spots as well as revisit some of old favorites.

"I’d say it was a real eye-opener tonally, because it was our first time in over 100 shows since last summer without our normal backline. But we managed to get it right from the first few nights onwards, with the full range and volume. Our main rigs are generally built on things I’ve been making...”

Of course! Tell us more about Nuñez Amps...

“We’re more of an unusual company that make class A and class AB discrete handwired stuff. We’re not trying to put out tributes or regurgitate designs. It has to feel new. It all came about because I went from playing bass for 13 years and then to guitar… and I just wasn’t having it!

“I wanted to feel those chords and push air like I had been on bass. My tones felt thin and fizzy, there wasn’t the same physical movement. I got offered a lot of nice stuff but none of it really spoke to me...

“I partnered up with my friend Gary Phillips [Overtone Works] to start designing circuits from the ground up, sourcing components that were unusual in the guitar world.

"We were coming from this whole different angle, instead of giving people X-amount to work with or giving them Chinese components and cute graphics telling them it would be good enough, it was more about giving as much as possible and letting them carve out or shape where they wanted to live.”

What kind of features did you include to facilitate that?

“Our mission was to never settle or run with the pack. Instead, be unusual and unique. We’re about the science and emotion of music. I want our players to have full control of their frequencies and gain, from asymmetrical clipping or symmetrical.

"What works for one person may not work for anyone else, so as designers we wanted to give everyone their own clear, low-noise and rich tones. That’s the principle of our designs.

“We all know what it feels like to play a club and it sounds cool, then suddenly you play outdoors and feel like you’ve lost everything. That’s where we came up with the idea for push/pull EQs, extended range - many of pedals have shifts that let you go from full-range to a tighter more traditional sound - those were the building blocks of the company. And we’ve attracted a lot of interesting people, like Tim Lefebvre who was David Bowie’s bassist, plus death metal guys, post-punk, stoner... it’s so exciting to see what our players are getting up to.”

So what were the main differences in the rigs for the European dates?

“On this tour we had our Nuñez Amps overdrives, boost pedals and bass drives, but didn’t have the heads and cabs. Those heads are like two amps in one box, both channels with push/pull EQs and you can stack the heads too, with incredible class A discrete effects loops for each channel with individual switching and chicken knobs to engage series or parallel. You have the option of just a wet sound or a mix of both, with the affected signal turned up to taste.

“So we ran guitars into pedals straight into the effects loop return, using only the power section of the backline provided, which were Marshall JCM800 reissues. Someone, who will remain nameless, knocked over not one but two of those heads and they were fine… so I’m very happy we had them.

"I like the tightness and compression of an EL34 power stage. It was our Tetra-Fet Drive and Dual Range Boost doing a lot of the work, which helped bring the fullness and fidelity that’s synonymous with our sound. We’re after these real deep and rich hi-fi kinda tones.”

Running straight into the loop isn’t unheard of, but definitely a bit out there...

“I guess it’s not normal! We started to get messages from people about the rigs asking why we weren’t using the guitar amp inputs, they were really curious and bothered. So I had to explain it was guitars, overdrive, boost and then return - for more bandwidth and frequency range, as opposed to running pre-amp on pre-amp.

"So it was as close as possible to what we use at home. Luckily our pedals could not be configured any better for a full-on sonic experience, building off everything we’d learned along the way...”

Writing and recording Admission must have felt extra special for you personally, considering it marked your first release as a guitar player in the band...

“Switching from bass to guitar, I feel like almost a bit more like a producer because I have a lot of ideas from a more birds-eye view. On this album I definitely let loose and unleashed on some new things.

"In the past I’d done some licks here and there but this time I was able to really go for it, experiment and create things that I kinda wished our records always had, with certain approaches for the guitar.

“I’ve always been involved in our writing and recording processes. I’m a very opinionated person because I love to explore the feeling of a song and think about how we can take it further with the instruments we have. I’ve always been a fan of guitars doing things that are not so expected.

"I love the playing of Melt Banana and My Bloody Valentine. I like the players who make guitars not sound like guitars. It could be through one pedal, it could be a few, or how it’s strummed and tuned, but it has to sound different and help launch the vibe of the song.”

How much does the live experience feed into the recordings and vice-versa?

“The second portion of my timeline in the band has made me think about writing and committing to ideas that we’d want to play for the next few years, night after night. We are a two-guitar band so there should be plenty of room.

"People tell us some parts sound like way more than two guitars, which for me is really exciting. You can build a loop, play over it and harmonize… it’s all about building the song musically and texturally.

“Once all the tracking was done, everyone went home and I was left with a bunch of songs that I felt definitely needed more guitars. So I just went with what the songs called for. Some things I’m playing different live, it’s about chasing a feeling and the more you do that, the easier you can find it. I quite like coming up with alternate versions!”

Beyond your own pedals, what else is currently on the board?

“I’ve always had difficulty with overdrive and fuzz, there’s no drama on that front anymore! After my own pedals I go into a tuner, then an effects loop bypass to keep my signal chain as pure as possible, that way I can switch into my effects and even bring back loops later in the song for a big crescendo.

Excited to get back out on the road! Our first show of 2020 is this Saturday at South Side Ballroom for @powertriptx's Evil Beat Vol. 2⁣ ⁣ Tickets available at the link in our bio⁣ ⁣ 📸@angelo_g_rossi TORCHE

“Right now my pedalboard feels so glued together sonically! The order has changed a bit but most of it is the same - there’s an EarthQuaker Arpanoid which is an octave arpeggiator, though I don’t actually use the arpeggiator side. It has this warmer, less synthy sound than a Whammy, which is why I got it. I get more weight beneath my strings, it feels more full than just a tiny bit of delay would. Then I have the mini MXR Phase 95...”

What kind of songs will you kick that in for?

“I’ll throw it in for the closing track on the new album, Changes Come, and the second half of the verses on Times Missing. It’s a fun pedal to turn on with the trem behind it to expand on textures and bring new sounds. Sure, I’m playing rhythms but I’m playing all sorts of other shit too.

"That goes into my first delay, a Catalinbread Echorec, which is nice for dreamy and misty swelling delays. It has a nice chorus-y glaze, followed by the Earthquaker Avalanche Run, and these days I tend to keep both on…

“So my delay sounds are generally two delays. The EarthQuaker is actually a delay reverb. I’ve found a way to use both in my solos and dreamier parts, like the track Admission, where I might tweak the Avalanche Run’s decay. Then there’s a DigiTech Hardwire DL-8 to create loops. And to avoid sounding too clean or contemporary, as I tend to prefer sounding a bit trashier and straight-in, I stick an additional overdrive, the Tetra-Fet, at the end of the chain…” [You can now buy this very pedal in highly limited numbers.]

Which is also a bit unconventional, perhaps?

“Yeah, I get why it might sound counterintuitive! But it works because of how we designed the amps, almost like a buffer at the beginning and end of the chain. Some of the effects are digital, so our pedals add analog fidelity and saturation on each side. For other bands shrillness and harshness can work really fucking great, but I’m more into warmer, front-end sounds generally.”

How much of a part do the octave-based tunings play in the overall effect of the music?

“That’s a big familiar sound for us. It’s fairly simple, we use a couple of different ones but generally they’re octave-based. So whatever the second string is - in standard that would be A – the low E gets forfeited and we drop it down to a low A. That brings an octave effect whenever you start barring and it only gets bigger when there’s two guitars and a bass… hopefully in tune!

“I actually find the tiny variance in pitch between the guitars creates this moving, physical sound that feels bigger. Just tiny minuscule tuning discrepancies or variations that can make two guitars sound like four guitars. Our shows are a fun scenario that feel engaging, but by the end of it you are completely swallowed and engulfed in these guitar sounds that feel like they’re physically coating you with molasses or caramel or whatever!”