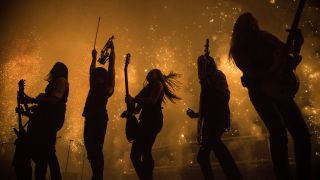 While you’re hanging your stockings by the chimney with care, Trans-Siberian Orchestra are - once again - criss-crossing the country with their Yuletide-themed, prog-rock extravaganza.

In this exclusive interview, guitarists Chris Caffery and Al Pitrelli talk TSO and touring Christmas Eve and Other Stories.

Pop quiz, hotshot: which group has played to more people in North America over the past decade than any other rock act? Most music business observers would likely answer U2 or Metallica, maybe the Stones or the Dave Matthews Band.

According to industry trade publication Pollstar, however, the top rock draw in the US during the second decade of the 21st century is a band that tours just seven weeks each year.

From every mid November through late December, though, Trans-Siberian Orchestra (TSO) performs to approximately a million fans, selling out arenas from coast to coast with a Yuletide-themed show that mixes rock, classical and theater with a state-of-the-art production featuring dazzling lasers, extensive pyrotechnics and a stage that literally transforms before your eyes.

2019 marks the 20th anniversary of the group's first winter tour, and once again, guitarists Chris Caffery and Al Pitrelli will lead the charge.

Pitrelli - who has toured with TSO for all but one of the past 20 years - boasts an impressive résumé. In addition to a brief stint in Megadeth (which caused him to miss TSO's winter tour in 2000), the Long Island native has toured or recorded with the likes of Alice Cooper, Asia and Blue Oyster Cult.

Fellow New Yorker Caffery - who, along with drummer Jeff Plate, is the only musician to take part in every TSO tour over the past two decades - has performed with artists ranging from German metal queen Doro Pesch to Polka king Jimmy Sturr on top of releasing six solo albums.

Savatage's 1995 rock opera Dead Winter Dead was the first album on which the two guitarists played together.

At the time, Caffery had just rejoined the band - founded in Florida by brothers Jon and Criss Oliva during the early Eighties - after a nearly five-year sabbatical, while Pitrelli was a new recruit who had been recommended to the group's producer, Paul O'Neill.

The album featured a symphonic instrumental, “Christmas Eve (Sarajevo 12/24),” that became a modest hit - but when the song was re-released the following year under the TSO moniker, a star was born.

Three years later, the nascent group embarked on their first tour; since then, TSO has performed before more than 15 million people, selling more than half a billion dollars’ worth of tickets along the way.

Pitrelli anchors and serves as musical director for “TSO West” (in which he's been flanked for the past 18 years by guitarist Angus Clark), while Caffery acts as the unofficial master of ceremonies for “TSO East,” in which he shares guitar duties with Joel Hoekstra (Whitesnake, Cher and frequent Guitar World columnist).

It might sound grueling, but Pitrelli, 57, says preparation is key. “This isn't something that I sit around all year long and then just go, 'Oh, I've got to get ready to go to work,'” he says. “Physically, mentally and playing-wise, I'm never out of shape, and I'm never really unprepared. If we're not touring, we're recording. If we're not recording, we're touring. There's always a guitar in my lap.”

Caffery explains that while his five-days-a-week pre-tour workout schedule “prepares my body to realize that every single day, it's going to be moving,” adrenaline plays just as important a role as practice.

“You're never really performing until you're in front of people,” he says. “It's hard to physically prepare yourself. You can play for five hours, but you don't put the same emotion into it. It's always like that with a metal band when you go on tour - we call it gig-neck, when your neck isn't used to that movement. It takes a few days to get into it. That's why I always find that I don't get more tired as the tour goes on - I get stronger, since my muscles adjust and it gets easier.”

The guitarist - who earlier this year released an album with former Judas Priest vocalist Tim “Ripper” Owens under the moniker Spirits of Fire - also says his road habits have matured at the age of 52.

"We take care of ourselves a lot differently now,” he says. “In my 20s, we’d be hanging out at bars and going to shows on our days off. Now we don't do anything other than rest. We're aiming a different energy toward this. There's just so many people who come to see this show that you want everybody to see the best thing we can do.”

Ensuring that quality is Pitrelli's primary responsibility as the group's musical director, a role he also performed for Alice Cooper in the late Eighties. “There are a lot of moving parts on that stage, from the band to the production and everything else, and my job is [to make sure] that when stuff does go pear-shaped or upside-down, the audience will never know,” he says.

“From the downbeat at the opening of the show until we take our bow, I'm focused on one thing and one thing only — making sure everything is spot-on.”

At the same time, Pitrelli - who favors Les Pauls and Stratocasters, as well as his Dan Armstrong Plexi - has his own parts to play and cues to hit, usually while at least 20,000 eyeballs are on him.

“Once I start looking out into the audience is where I lose my focus,” he says. “If I look up and I really start to think about what's going on in front of me, it doesn't go well. I've learned to really pay attention to the details and the task at hand and not to get caught up in the periphery of it.”

Caffery voices similar sentiments. “I'm more comfortable in front of 50,000 people than I am with 50,” he says. “When you stare at a couple of people, you actually notice that there's people watching you, but when you keep staring into a ton of people, there's too many to pay attention to any one. You're able to take your nervous energy and kind of spread it to a large group.”

Before playing to arena crowds with TSO, Caffery and Pitrelli gained valuable experience in a variety of settings.

In addition to touring with the big names mentioned previously, Pitrelli was also a prominent session guitarist in New York City, where he recorded with pop singers such as Celine Dion and Taylor Dayne and tracked jingles for the likes of Pizza Hut.

Caffery, meanwhile, began playing clubs regularly as a teen - he opened a New York show by Metallica and Overkill as a 16-year-old - and had already been a member of several national/international acts by the time he turned 21.

After the two joined forces in Savatage, they performed dozens of shows together around the world, primarily in large European clubs but also at notable festivals such as Wacken (Germany), Dynamo (Holland) and Monsters of Rock (Brazil).

“Al's a great partner,” Caffery says. “Our guitar playing was so heavy together, but we never really spent a ton of time working on it. It was one of those things where we just played, and it was what it was. We both have a pretty aggressive style in our rhythm playing, and I think there was something really cool about the way our styles married together.”

It wasn't until TSO took off, though, that the pair began to consistently perform inside arenas.

Pitrelli says his approach hasn't deviated drastically, however. “My piece of real estate on that stage really hasn't changed from the first club I ever played to the last arena we did last year,” he says.

“I stand where I stand; I've got my pedal board in front of me; and the drummer's exactly where he's been my whole life. If anything, I've learned over the last five or six years to enjoy the moment instead of worrying about the end of the show or what's going on with the hydraulic lifts.”

Those lifts will once again work overtime during this year's TSO tour, which sees the group performing its debut album, 1996's triple-platinum Christmas Eve and Other Stories, for the first time since 2011.

While TSO's concerts feature far more bells and whistles now than during its early years on the road, Pitrelli says the heart of the show hasn't changed.

“I know the presentation from a visual point [of view] will be so much more breathtaking than it was the last time we did the show because of the advances in technology,” he says, “but my job has been exactly the same since the opening note in '99 - play guitar, be a good MD and make sure the story Paul wrote is presented the best possible way.”

Still, Caffery - who uses “a mix-match of everything” live, including guitars by Dean, Jackson and his most recent acquisition, an Ernie Ball Music Man Luke - explains that technology presented the group's performers with some learning curves.

“At a point before most people were using in-ears, it had to work with us, because we were going to these spots away from the stage and up in the air, and you could not play to the PA,” he says.

“There's a delay of light and sound, so you couldn't play while listening to the PA system at the back of the arena. You're hearing what the band is playing late. It's amazing what that speed of sound and light is actually like. I think that's the one thing that was not necessarily the most difficult, but it was something you had to adjust yourself to.”

The biggest adjustment, though, was forging ahead after O'Neill - TSO's producer, lyricist and creative visionary - died in 2017 due to an accidental reaction to prescription drugs.

At the time, the band was recording several albums concurrently, but O'Neill's passing brought the group's future plans to a screeching halt.

Recently, though, the wheels have started to turn again, as Pitrelli says TSO has begun recording new holiday music at its studio in Tampa, Florida.

Accordingly, perhaps the band's third decade of touring will even surpass the unrivaled success of its second.

“There's a lot of stuff that was not completed that Paul wanted to see come to life,” Pitrelli says. “He wanted this to live forever, and it's comforting to know that that's being accomplished now that there's new music being worked on. It just makes my heart smile, because at the end of the day, Paul's wishes are coming true.”