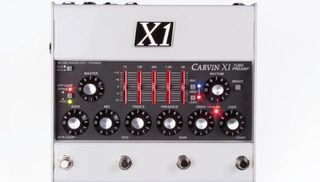 Following the relaunch of its website in January, Carvin has now announced a new executive leadership team. Effective immediately, Joel Kiesel will serve as President and Kristen Kiesel Lieurance will serve as Vice President. Joel and Kristen are the children of Carson Kiesel, who recently retired from his role as President, and the grandchildren of founder Lowell Kiesel. They mark the third generation of the Kiesel family to head up the company.

Under the new leadership, the company will continue to offer new guitar, bass and pro audio products including the Steve Vai Legacy Drive Preamp Pedal and the EM900 In-Ear Monitor System. Orders will be fulfilled from a new, centralized U.S. warehouse in order to offer faster service to customers nationwide. The company is now shipping direct worldwide to most countries.

“In the spirit of my grandfather and my father we will continue to offer great sounding gear for musicians and sound professionals,” Joel Kiesel said. “We’re busy designing new products that will continue our legacy of quality and features that you’ve come to expect. Please join us as we launch into this new era of our company’s history.”

Recently, Carvin also announced a new product, the X1 All Tube Preamp Pedal. The unit features the original circuits of the X100B amplifier. It has two channels of tone controlled by the Master volume: the Rhythm channel—which gives clean tones—and the Lead channel—which gives overdrive tones. The Gain switch is built for even more intense leads.