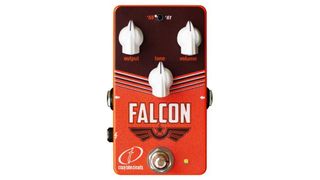 Crazy Tube Circuits has unveiled the Falcon, which the company says was “designed as a painstakingly close emulation of the circuits” found in a circa 1955 Fender Tweed Deluxe and a 1961 Brownface Princeton.

The pedal, which utilizes JFET technology, recreates both the overdriven sounds as well as the lower gain / clean sounds of those classic Fender amps, Crazy Tubes says. There are controls for Output, Volume and Tone, as well as a two-way switch to toggle between ’55 and ’61 sounds.

For more information, head over to CrazyTubesCircuits.