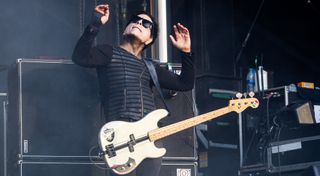 I’ve done lots of pedal clinics, I have a pedal website, and I’ve toured with over 40 pedals in a live situation, so people are always asking me about pedals. Guess which question I get asked the most?

“What order do you put your pedals in?”

Most times, I tell folks that it’s a matter of taste or that it depends on what they’re going for. But that’s usually not enough. So, with a warning that my live pedal lineup might contradict the following advice (as I said, it all depends on the situation), here’s a primer about pedal order. Let’s go in reverse, from the end of the chain to the output jack on your bass.

As a general rule, sampler pedals go at the end so that any sound I create can be sampled on the fly and put on repeat mode. With effects such as a Line 6 DL-4 or Hotone Wally Looper, I can also pitch sounds up or down or put them in reverse, which is cool when you are creating soundscapes between songs, as I did all night long in Mars Volta sets.

Somewhere near the end of the chain but before the samplers, I usually have a fast-cutting tremolo like an Earthquaker Devices Hummingbird or Gojira’s Trembulator. These allow me to chop things up or make them pulsing or wide and wobbly. This is also the right place for the new wave of glitch/sample machines like Red Panda’s Particle, the MWFX Judder, or bitcrushers like WMD’s Geiger Counter. Warning: These pedals’ randomness or dramatic loss of low end will pull your bass out of its main function of being the foundation for the music.

Next, I go with octave or sub pedals like DOD’s Meatbox subharmonic synthesizer. These effects are usually not as effective up front because fuzz, distortion or overdrive pedals down the line compress that lower octave, rendering the low-end addition useless. This area of your signal chain is the most powerful because bassists own the low end, and this is where we can do the most in terms of bass with effects.

We are now near the front of the signal chain, which is where I take my sound over the top with fuzz boxes, distortions and synthesizer pedals. I use distortion to get aggressive and add fuzz for a saturated dirt assault. Pedals like my vintage Electro-Harmonix Micro Synthesizer or Godlyke’s Great Divide turn the instrument into a huge Moog-like bass synthesizer, helping me go from traditional to a massive, jet landing tone with one stomp!

At the front of the signal chain, I break with tradition. Most bassists put compressors near the end of their signal chain to wrangle the wide scope of frequency their bass sounds can create, and I know that putting a compressor at the end of the chain is great for streamlining your tone and making it easier for the person running sound. But I use compressor pedals up front to slam other pedals and make them react in a more radical fashion.

I like using the Boss CS-2 compressor because it overdrives my signal a bit, which makes for magical combinations with other pedals. Usually, I put an overdrive pedal like Moog’s MF-Drive or an Earthquaker Devices Speaker Cranker before the CS-2 for added distorted drive.

Modulation effects thicken the signal, giving it layers of texture while adding harmonic content that can enhance a song’s chord structure and a band’s orchestrations. These pedals, such as choruses and vibratos, work best after the compressor stage and before the overdrive/distortion/fuzz section. This section includes traditional chorus (I like Maxon’s CS-9 or MXR’s Bass Chorus Deluxe), vibrato (Boss VB-2 or Chase Bliss Warped Vinyl) and radical effects like Earthquaker Devices’ Rainbow Machine and Organizer pedals.

If I don’t start with my compressor, then I begin the chain with an envelope filter like my Mutron III or a bass wah like MXR’s 105Q. Because envelope filters and wah filtering can be fairly dramatic, it is good to have the compressor after these effects to make sure the filters don’t blow speakers.

Wrapping up, I have to reassert that all these ideas are malleable and should not be taken as strict rules. You could go in the exact opposite order, and I’m sure that with determination and focus, you could come up with sounds that are just as interesting. What I offer here is a source of inspiration to help you find your own new pedal order.