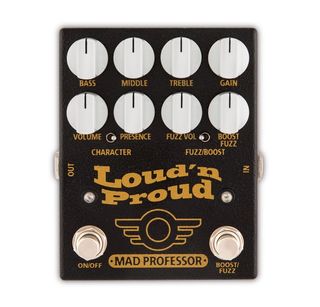 Mad Professor Amplification has unveiled the new Loud 'n Proud, which the company refers to as an “amp-in-a-box pedal.”

﻿The new unit replicates a complete amp signal path—not only the preamp, but also the power amp containing phase inverter, push-pull stage, and output transformer simulation—resulting in a pedal that not only sounds but also behaves like a real amp.

The pedal’s pre boost has the capability of pushing 13dB, adding a nice amount of gain, while the fuzz is designed to work like a vintage germanium stage.

There’s also a switch for two different character voicings: tighter bass and slightly compressed tone on the left, and looser bass, including maximum dynamics, on the right.

For more information, head over to Mad Professor Amplification.