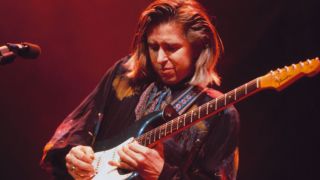 Before the release of Ah Via Musicom in 1990, Eric Johnson had a small but dedicated cult following that discovered him via his club performances in his hometown of Austin, Texas, his appearance on the PBS showcase Austin City Limits, his 1986 Guitar Player magazine cover story on his debut album Tones or bootleg live cassettes that were circulated by electric guitar fans.

Ah Via Musicom catapulted Johnson to guitar-hero stardom, achieving certified Gold and Platinum sales. A crucial element of the album’s success was the instrumental track Cliffs of Dover, which combined an infectious, lilting Celtic-inspired melody that appealed to general music fans with dazzling, blazing runs and a sweet, violin-like tone that impressed fans of technical guitar playing.

Throughout most of Johnson’s career, he has used a sophisticated rig that consists of three different amp and effects setups for clean rhythm, dirty rhythm and lead tones. For Cliffs of Dover, he used his lead setup exclusively, which is dialed in to provide a sweet, sustaining tone with a smooth, non-percussive attack resembling the sound of a bowed violin.

This studio rig was relatively simple, mainly employing a Maestro EP-3 Echoplex, Paul C.’s/Chandler Tube Driver and a 100-watt Marshall half stack. Johnson used two different guitars in the studio while recording the song: an early-'60s Gibson ES-335 for most of the song and a 1954 Stratocaster used for 25 seconds of the intro (before the rhythm section joins in) and for the first 10 seconds of the solo starting around 2:45.

Several details are crucial for generating Johnson’s violin-like tone, including turning the amp’s presence and treble controls all the way down, using a Y-cable to access both channels turned all the way up and dialing in the Tube Driver (still made today by B.K. Butler and highly recommended), so its gain provides smooth compression without overly distorted sizzle.

Johnson’s 'bounce' picking technique, where he brushes upstrokes on the strings instead of plucking them, is also a key element of his smooth, violin-like tone that minimizes the percussive attack.

Placing the Echoplex in the signal chain between the guitar and the Tube Driver causes the delay/echo effects to only be prominent on more sparse and percussive parts and 'duck' or sound more like reverb when playing faster and more aggressive lines.

TONE TIP: Start with the Marshall’s Tilt control at '5' to simulate using both Marshall channels at once, and dial to the left if you desire more warmth. If you can afford it, adding a Dunlop Echoplex Preamp will get you even closer to Johnson’s violin-like warmth and sustain.