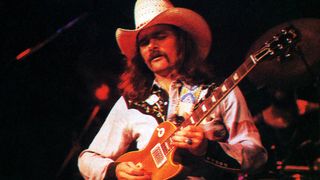 Sometimes we want to make a bold statement in a solo. This could be either as a dynamic device to take centre-stage before settling into a more laid-back melody line, or to assert our presence against a dense mix, as I’m doing here.

The idea behind these examples is to demonstrate long sequences across the strings and/or the fretboard that might form the pinnacle of a solo. With this in mind, I’ve played four examples, rather than stuff too much information into one overwhelming solo.

The examples are drawn from different ideas: pentatonic shapes, arpeggio fragments, angular intervals and classic blues licks – and often a mixture of more than one of these.

There are several approaches that could work tonally (a twanging Telecaster would certainly cut through, for instance), but the driven humbucker sound I’ve chosen offers a good platform for the kind of ‘grandstanding’ we’re going for. Think Joe Bonamassa, Dickey Betts, or Lynyrd Skynyrd’s Gary Rossington and Ed King.

In the first instance, bringing set pieces like this into supposedly improvised solos may feel contrived, but this need not be the case any more than when we use scales or other patterns. It’s what we do once we’ve internalised these concepts that counts.

The chances are you will prefer some ideas to others, or that you might find variations that work better under your fingers. Which is great; there’s no need for you stick rigidly to anything here.

Finally, remember that these pieces are ‘vocabulary’ and not the blueprint for a whole solo. Keep in mind that if silence or a single sustained note are the opposite numbers to these ideas then there are 100 shades in between. Hope you enjoy these licks and see you next time!

The slide down the E string is a statement in itself, but starting low, with some selective palm muting, this example also asserts itself early on by taking up a lot of sonic space in the bass register.

It subsequently moves up through a sequence of sliding intervals, which are taken directly from the five minor pentatonic shapes. This allows you to ‘walk’ up the fretboard to a position that allows the final flurry up to the held string bend.

Played in groups of six, this example moves quickly through two octaves across the strings, superimposing both F and G major arpeggios/triads over the G chord on the backing track, mixing this with a short scale run (G Mixolydian) to finish.

Starting on C over a G chord like this is counterintuitive. Moving swiftly to the rest of an F arpeggio then G in this way allows you to superimpose this as a ‘passing chord’ type movement.

We're using groups of six again but this time descending through the D blues scale across the beat, set up with a held bend at the beginning.

There are lots of alternative ideas hidden away in this phrase, which you may only wish to use a part of, rather than continue all the way across the strings, but that’s an artistic choice I’ll leave to you! You could try reversing this whole idea, too…

This final example builds more of a musical context in, with some repeated high-register bends setting us up for the G Mixolydian run starting in bar 2.

Note that while this is Mixolydian, you can also view it as a G minor pentatonic with every Bb raised to B… Taking an angular intervallic approach to ascending back for a final held note, we’re dabbling with superimposed harmony again: root/5th root on F, G and C. A final touch is to use C# rather than C before that final bend.

C probably could have worked just as well, but I wanted to acknowledge the ‘major’ feel and be unpredictable!

This album sits between blues, rock and country in the same way I was going for with the examples. Check out Black Lung Heartache with its acoustic/mandolin intro and Heartbreaker, with its shades of Free and Deep Purple – no doubt helped by Glenn Hughes on vocals!

Finally, Prisoner takes a more laid-back but no less epic approach; it takes a confident soloist to ‘bring the fight’ to arrangements and production like this.

Dickey brings driven, sustained notes and intricate phrasing with careful note choices to tracks such as Nothing You Can Do and Blue Sky, which has some tricky harmony guitar, too!

Havin’ A Good Time also demonstrates a soloing style, which takes as much from country and rock as it does from blues – lots of major pentatonics and scale fragments that offer an alternative approach to the more common minor-based approach.

I think we all know about Freebird, but before we move on, check out the ferocity of that final solo – double-tracking also adds a layer of intensity, especially when some variations creep into the faster licks, but this is an excellent template for the idea of impressive blues-based licks. Simple Man and Tuesday’s Gone also throw down the gauntlet to any soloist. If you’re going to step up here, it has to be good!