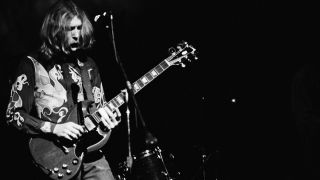 Though remembered by many as the guitarist who played slide on the extended outro of Derek And The Dominos’ rock epic, Layla, there’s actually a huge amount of other Duane Allman material to check out.

Here, we’re concentrating on his standard-tuned non-slide soloing, which played an equal part in establishing Duane’s credentials – particularly the attention-grabbing solo at the end of Wilson Pickett’s cover version of The Beatles’ Hey Jude, which would make Duane known to Eric Clapton, pre-Layla.

Duane was well-regarded enough by top industry figures of the day to be taken on as a full time session musician at FAME studios in Muscle Shoals, playing for Aretha Franklin, Otis Rush, Boz Scaggs and many others.

Though Duane is probably most associated with a Goldtop Gibson Les Paul, he was known to use various other models, including the Fender Strat – so there’s no need to feel you must have a specific guitar to play in his style.

A sweet-sounding, treble-rich guitar and a light, creamy overdrive is all you need to tackle this month’s tab, including our final two examples – which are based on the harmonised dual-lead guitar lines Duane played with Dickey Betts on tracks such as Blue Sky – one of the last recordings he made in his tragically short life.

Duane was first and foremost a melodic player, with influences ranging from Robert Johnson to Miles Davis. Using a neck pickup and medium overdrive, this example takes an E major pentatonic (E F# G# B C#) direction and adds a few staccato rhythmic notes at the end. Use these approaches for a bright, Southern rock vibe.

Going for more of a soaring high register style, this Allman-influenced lick adds in some country-rock inspired string bends where the bent notes ring against a fretted note – aka an ‘oblique’ bend.

This all takes place in bar 3. As you can see, you bend the second string at the 12th fret while holding the first string at the same fret – a classic lick!

An alternative take on our previous lick, this idea goes more for a memorable hook rather than what feels easy under the fingers – and you may need to chop and change position around the 9th to 12th frets to find perfect finger position at any given moment.

Try using either your second and third fingers for the oblique bends here.

Taking our inspiration from the Allm an/Betts brand of harmony licks, this ringing arpeggio could easily be harmonised with a second guitar playing other notes from the same chords.

You probably know E, E7 and A chords – just fret a shape you know and play the notes in time with our arpeggio.

This lick begins in the same vein as our previous arpeggio before switching to the kind of harmony line that the Allman Brothers became so famous for.

Our track is in E Mixolydian (E F# G# A B C# D). To harmonise with our lick, aim to always be a 3rd higher or lower than the notes we play. For example, where we play an A note you’d play C#; where we play B you’d play a D, and so on.