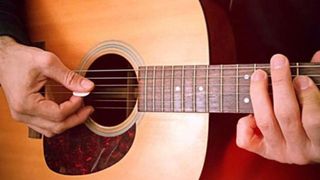 In a previous column, I wrote about how "Musical Purity is Overrated."

That column focused on how the Internet is slowly chipping away at the old-school mentality of rigid musical genres and why this is a good thing for creativity. In this column, I thought I'd take the opposite standpoint and apply it to the topic of "noodling."

First off, what is noodling? Well, it depends on who you ask. But for our purposes, I'll say it is generally the act of unorganized or undisciplined practice. Those of us who have been playing for a long time know it takes dedication and sometimes sacrifice to accomplish a certain goal.

You want to get better at fingerpicking and sight reading, but you're a metal guitarist? Then you're going to have to regiment your time every day to maintain your existing chops while still having enough energy to focus on improving those new techniques and skills. One way I've managed to deal with these challenges through the years is to write down my practice routine.

If I have a lot on my plate, I'll even alternate my practice days. For example, I'll practice a certain amount of scale and arpeggio shapes on Monday, then practice a different batch of shapes on Tuesday. This is similar to what weightlifters do in their workout routines; alternating specific muscle groups on particular days. This is definitely a great way to alleviate some of the stress you might feel by having to cram in every speed exercise, chord voicing and lick into a single day, especially if your time is limited.

But there is an aspect to this highly systematic approach to practicing that raises the question, how often are you being creative?

Creativity is hard to regiment. It's one of those ephemeral moments that is tough to predict and even trickier to practice. Sure, you can set aside time in your schedule to be "creative," but what if you're not feeling particularly creative 45 minutes into your routine? A dangerous byproduct of all this organization and self-discipline is that your senses can become dulled to the prospect of uncertainty and spontaneity. In fact, uncertainty and spontaneity can even become an enemy.

If all you do is practice your routine seven days a week, how do you think you're going to feel when a friend asks, "Hey, do you wanna jam?" Depending on your personality, it could be a great escape from the monotony of your daily playing, or it could feel like a thorn in your side. Why? Maybe because you've been so conditioned to think that only structured practice is effective in improving your overall musicianship that you've lost sight of what it feels like to just play for fun.

This is where noodling comes in. As I said earlier, it's generally considered to be just unorganized playing. But maybe this is exactly what you need once in a while. Maybe it's what we all need.

This is something I've had to struggle with myself sometimes, but I think a good way to approach it is to carve out some "noodling" time into your weekly schedule. I know this idea seems a bit like an oxymoron, especially since I just talked about how you can't predict the spontaneous nature of creativity. So, instead, I suggest setting aside the time whenever you're feeling particularly inspired. For example, let's say you have your list of practice drills in front of you, but you can't get this melody out of your head. You're not sure where the melody comes from. It could be from a song you've heard on the radio or something that just popped into your head—a moment of inspiration, perhaps.

You might feel tempted to ignore the melody or push it off until you're done with your practice routine. But this is the moment when you should decide, "It's noodle time." Play the melody, maybe record a chord progression that complements it, mess around with it. No "to do list" involved. Just be spontaneous and see where this new idea takes you. A couple of days later, you might realize the melody was from a popular song on the radio ... but so what? Maybe the chord progression you wrote underneath it involved some interesting chord voicings you've never used before. Or maybe it is an original idea and in the next few days you have yourself a completed song.

The potential benefits of unorganized playing (otherwise known as noodling) can equal, if not exceed, the benefits of regimented, sometimes mindless practice. As always, the secret is balance. You're most likely not going to have that moment of inspiration every day. On those other days, that's when you should focus on your techniques and get to work with that metronome.

But don't let the pursuit of technical prowess blind you to the main goal of playing any instrument; the ability to express yourself creatively through music, and to have fun doing it!

Chris Breen is a New Jersey-based guitarist with 14 years of experience under his belt. He, along with his brother Jon (on drums) started the two-piece metal project known as SCARSIC in 2011. Due to a lack of members, Chris tracked guitars, bass and vocals for their self titled four-song demo (available on iTunes, Spotify and Rhapsody). They have recently been joined by bassist Bill Loucas and are writing new material. Chris also is part of an all-acoustic side project known as Eyes Turn Stone. Chris teaches guitar lessons as well (in person or via Skype). If you're interested in taking lessons with Chris, visit BreenMusicLessons.com for more info.