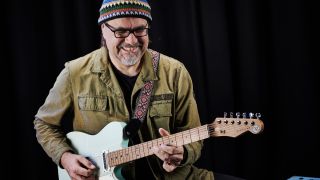 For many years, Greg Koch was one of those classic ‘best guitarists you’ve never heard’, but thanks to online videos and his tireless touring and clinic work, he’s finally getting some deserved recognition.

Although rooted in blues and blues-rock, his style covers the whole gamut of American music traditions. He can effortlessly mix grungy rock riffs, slippery swing chords, old-time fingerpicking and vertiginous country bends… and all with a sense of humour and a taste for the unexpected.

In the following examples, Greg demonstrates several of his favourite approaches for breathing new life into familiar licks. We’re in a hybrid Mixolydian blues scale tonality here, working in A major and then E major, so you can apply these ideas to a huge range of rock, blues and country contexts.

Greg uses hybrid picking (pick and fingers) in most of these licks, so we’ve notated exact picking directions where it’s crucial to the sound of the lick.

Greg starts with an innocent Texas blues lick in A, but then temporarily shifts up a fret (into the key of Bb)

for the second half of bar 1. Simply shifting your scale shape up or down a fret is a great way of adding some ‘outside’ notes to a lick. Just remember to come back ‘inside’ before it starts to sound jarring!

Greg gets some great sounds from what jazz guitarist and educator Howard Roberts called “sonic shapes”. Just take a simple pattern and move it to different string groups and fretboard positions.

For once, you’re allowed to put the shapes first and see what surprises emerge. This line is A Mixolydian (A B C# D E F# G) with an added minor 3rd (C).

Starting with a slightly tweaked version of the opening phrase from Example 2, Greg uses that ‘sonic shape’ to get some ear-twisting outside notes in bar 2, before ending with some high harmonics and behind-the-nut bends.

Remember, the 5th fret harmonics are the same notes as the open strings, so you’re bending B to C# here.

Example 4 – To The Nines

This is just a first-inversion A9 chord shape (one you should learn without delay!) moved around in parallel to create a riff. Although this approach can be risky, generating a lot of outside notes, it usually works fine if the top notes form a recognisable line – in this case, the A blues scale (A C D Eb E G).

This one is all about 'touch harmonics', the same principle as open-string harmonics but using fretted notes.

Fret a note as normal then touch the harmonic 12 frets above with your (picking hand) index finger and pluck with your thumb.

The higher note of each pair is a regular fretted note, plucked with your third finger. It’s those parallel 9th chords again.

We now move to a general E Mixolydian (E F# G# A B C# D) tonality, and this is a more linear application of sonic shapes.

The four-note pattern in bar 2 creates some cool chromatic lines and then Greg ends with a little E-Eb-D chord figure.

After all, the notes E, G and Bb are in the blues scale, and we routinely add the C# (major 6th) as it’s in the Dorian, Mixolydian and major pentatonic scales.

Using E Mixolydian (E F# G# A B C# D) with several chromatic passing notes, Greg shifts smoothly down through the strings, also descending from the 7th fret to the open E7 shape.

Take care with the double bends – in bar 3 you need to pre-bend both strings by one semitone, but in bar 4 the G string goes up a full tone (two frets).