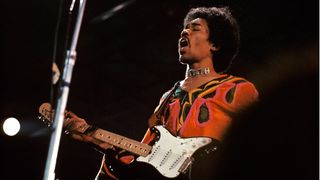 Sometimes it is interesting to think about when the electric blues was an ‘up and coming’ genre, before Eric Clapton and his Gibson Les Paul, before the invention of the overdrive pedal and the era of guitar shops full of people noodling on the pentatonic scale.

The idea of electric guitar was new – and resisted by many (especially Gibson!) – but players were looking for new sounds, or perhaps simply to be heard in the first instance, later realising the possibilities amplification brought to the table.

For many, this reached its zenith with artists such as Jimi Hendrix, who combined his instrumental skills with an array of pioneering gadgetry, as well as his legendary showmanship.

In the present day, we have an astonishing amount of well-documented and recorded influences to refer to, so it’s hardly surprising if we sometimes feel we’re looking backwards more than we look forwards.

In this example solo, I’ve tried to reappraise my own approach from every angle. Rather than going for the relatively easy option of a forgiving overdriven tone and a 12-bar backing track, the tone is clean (albeit heavily compressed) and the backing style owes more to funk than blues.

There’s plenty of pentatonic phrasing, but there is also a chordal element coming in towards the end of the solo. Starting out with fingerstyle technique allows me to ‘ping’ the strings against the fretboard with a twangy attack, enhanced by the compression.

The repeated phrase in the first example is definitely a blues device, but it’s used here in a different context. Why not try dialling up the sort of tone you would never normally use to play solo and see where it takes you?

The repeated phrase and subtle development of the idea is a traditional blues technique but used in a slightly different context here. Note the strings are attacked quite emphatically with the fingers, twanging them back against the fretboard.

Some heavy compression gives a bit more sustain to play with, plus evening out the volume between heavily picked and quieter notes. It’s surprisingly expressive! To finish off the phrase, I’ve ‘dive-bombed’ the final note of the phrase using the whammy.

Moving to the pick, this phrase begins in a similar way, though in a different position on the fretboard. This allows the higher register to be reached more easily, followed by a descending pattern that uses the pentatonic scale but isn’t particularly blues-based.

Nevertheless, little touches like quarter-tone bends and slides do borrow heavily from the blues. The D#, or 6th, in the final bar is a nod to 50s rock ’n’ roll, which occurs again shortly…

This ascending run uses economy picking. The first two notes are played with a single downstroke across the adjacent strings, followed by a hammer-on to complete the triplet.

The second triplet is played with a single upstroke back across the third and fourth strings, ending with a pull-off. This interesting technique allows the strings to be crossed rapidly.

Once we reach the high strings, there is another touch of rock ’n’ roll with the doublestop/6th lick, preparing the ground for the final phrase.

We end in a similar manner to the beginning phrase but staying with the pick rather than reverting to fingers. The chord fragments are inspired by Nile Rodgers’ playing with Chic and Sister Sledge, using a maximum of three strings to facilitate moving shapes around quickly and rhythmically.

A short pentatonic run leads to a divebomb on the final F#. In the absence of a whammy bar, perhaps a slide upwards would be equally quirky/effective?

The results are very interesting, to say the least! It would be a shame to pick out individual tracks to recommend, but Rollin’ Stone featuring Jeff Beck might be the track to check out if you’re not going to listen to the whole thing.

As an instrumental album, Ghost Notes presents a great opportunity to study Eric’s unusual phrasing at length. You should bear in mind that Eric plays his guitars left-handed/upside-down, too, so there will certainly be some surprises in those phrases.

From the slow blues of A Few More Miles to the country style of Pickin’ ’N Grinnin’, you’ll find plenty of diversity going on here – look to Way Down for a heavier rock feel with some blistering soloing.

It would be churlish not to acknowledge Jeff Beck again here, as his pioneering approach has continued from the early days of electric guitar, consistently ahead of the curve.

The title track has a little good-natured fun with the jargon spoken in many a guitar shop. Big Block takes some traditional ideas and puts them in a completely new context, and Behind The Veil surely demonstrates the kind of invention I’m trying to get at with this month’s solo!