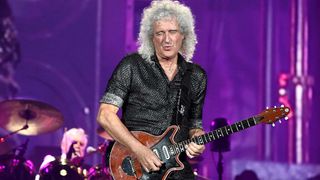 Brian May is a nimble-fingered and technical player with a razor-sharp understanding of harmony, but his melodic, singable approach to both riffs and solos means any player can learn from his style.

Here we’re looking at his lead playing – a diverse mix of influences from blues, metal, classical and even trad-jazz styles. Our licks cover a bunch of different techniques. The first reveals Brian’s metal side, with single-string tapping similar to that used in One Vision.

Brian is also well known for his scalic picking approach, as heard in tracks such as A Kind Of Magic, and for his soulful, melodic sense, as in Bijou and Who Wants To Live Forever, all delivered with emotive vibrato and string bends. We’re even taking a look at Brian’s use of delay and his trad-jazz and Dixieland-inspired arrangements.

Play the initial bends with your first and third fingers using alternate picking, then move your picking hand into position to tap the 17th fret with your middle finger.

This means that you can keep hold of your pick (or coin!). The descending notes are from the E blues scale, so this lick should work over most E-based rock riffs.

Start with a downstroke and use alternate picking to keep time. If you want to play a harmony part, use diatonic 3rds or 5ths in the key of C major.

Brian uses pre-bends a lot, famously in the Bohemian Rhapsody solo. The idea is that you bend the string by either a semitone or a tone before you pick it.

Set a delay pedal to add one or two repeats at a quarter-note speed. This means that you can self-harmonise as you play along with the repeating notes.

This is a descending B blues scale pattern inspired by Brian’s solos from tracks such as Headlong and Dead On Time.

Brian is a skilful studio engineer, and he pushed the recording studios of the 70s to the limit with his carefully arranged, layered lines.

Inspired by Freddie Mercury’s Baroque-tinged The Millionaire Waltz, this melody will help steer you in new musical directions and think about guitar lines as orchestration.

This lick is inspired by Queen classics like Bohemian Rhapsody and Bicycle Race – tracks that feature long, winding scale runs.

You’ll need to learn some scale shapes to take the idea further, but this lick will get you started. It’ll also help you improve your finger dexterity and you’ll develop your ear too.

Brian May’s playing can be incredibly emotive, as you can hear in tracks like Who Wants to Live Forever, These Are The Days Of Our Lives or Bijou.

Try using pre-bends to recreate Brian’s magic. All you have to do is bend up to the note shown in brackets before you pick the string. The PB marking tells you which fret to place your finger on.