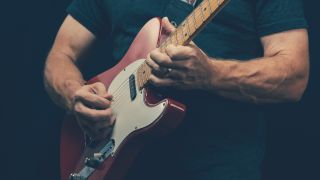 A lot of contemporary virtuosos like Tosin Abasi and Plini use both fingers and a pick to attack the strings – this versatile approach is known as hybrid picking.

In some ways, playing using only a pick or fingerstyle limits your potential. Using the fingers alone will limit your ability to explore some guitar techniques like alternate picking, economy picking (aka sweep picking), and funk-style rhythms.

The main issue regarding playing solely with a pick is that the majority of guitarists have limitations playing two or more independent melodies at the same time (aka counterpoint). Also, some wide intervals are hard to play at fast tempos, especially when they have notes that skip strings.

This lesson contains licks aimed at players who, up til now, have exclusively used a pick, as well as those who wish to expand their playing horizons and finger dexterity.

Try this warm-up very slowly at first, and match the sound and dynamics of your pick with the sound of your fingers. Try a few different picks, too.

Remember to use the suggested fingerings. The numbers on top of the staff represent the left-hand fingers, and the letters m, a, and c refer to the middle, ring, and pinky fingers of the right-hand.

This example is another simple warm-up using both the pick and the middle and ring fingers. At first, don’t let any notes ring together as in a chord. After that, you can also try to let them ring. Compare the two approaches.

This one's a nice exercise to develop your finger dexterity. At first, it might feel a little counter-intuitive, but after a while, it'll start to feel natural.

This line consists of small arpeggios and combines hybrid picking with both pull-offs and economy picking. Again, start slowly and make sure you can transition from triplets to the 16th notes smoothly.

This seven-note grouping consists of notes from the E minor pentatonic scale. Notice that in order to play it over two 4/4 bars, using 16th notes exclusively, we have to repeat the grouping four times and add four 16th notes to end the cycle and have the thirty-two 16th notes (7+7+7+7+4=32).

This lick uses the same pattern from Example 5, but now we are moving the seven-note grouping to adjacent strings that are still inside the E minor pentatonic scale.

Try to use the suggested fingerings and pay attention to the subdivisions. Getting this one up to tempo (150 bpm) might be a little challenging...

This next lick is fun to play and sounds very modern prog-rock. It combines economy picking with hybrid picking. It’s a fun one to play over A Mixolydian or G Lydian harmonies.

This line utilizes spread triads (aka open triads) almost all the way through. To spread a triad, all you have to do is take one of its notes and displace it to an upper or lower octave.

All the triads on this line are on root position and have the middle note (the major or minor third interval) displaced by one octave higher. Eric Johnson and Steve Morse love this concept.

This last example is a fun triadic line inspired on Brett Garsed’s style. Beats 1 and 2 on the second measure outline a D augmented triad, giving this line a brief outside effect. Try it over the following chords: GMaj7, CMaj7, Em7, Am7.

Play all the examples at three different speeds: slow, medium, and fast, and practice with a metronome. Play slowly at first to make sure you are developing a clean technique, but gradually increase the speed, as you feel comfortable.

Feel free to vary their rhythms, too. You can also incorporate different accents, rests, different note durations and rhythmic displacement (starting on different parts of the measure).

Don’t worry if you can’t apply the examples in your playing right away. It’s not supposed to work that way. It takes a long time and both a lot of consistency and discipline to make a new technique part of your vocabulary.

Remember to always personalize any idea you get from somebody else, including the lines from this lesson. In other words, edit, invert, extend, re-harmonize and transform them.

For more hybrid picking guidance, head over to Gustavo Assis-Brasil.