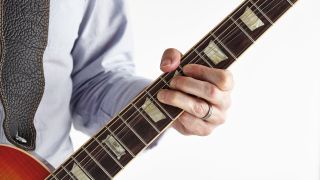 One of the most musically expressive guitar playing techniques is string bending. When one bends a note on the guitar, and adds some finger vibrato to it, these techniques enable the player to emulate the emotive sounds of the human voice.

This practice is an essential tenet of blues and blues-rock guitar playing, and it is at the heart of the lead playing styles of all of the blues greats, such as Albert King, Eric Clapton, B.B. King, Jimi Hendrix and Stevie Ray Vaughan.

In this column, we’ll examine a variety of highly effective string-bending techniques that can be used to add expressiveness to a single-note melody, whether you're playing blues, rock, metal or country.

Let’s begin with an extended pattern of the E minor pentatonic scale (E, G, A, B, D), as shown in FIGURE 1. This pattern combines open, 3rd, 4th and 5th positions to offer a useful fretboard range to cover. The overall idea is to approach the scale with the attitude that every one of these notes is available to bend and shake (add vibrato to), as opposed to sticking with the few more commonly used scale degrees for bending.

This “any note is fair game” approach alone will open the door to all kinds of new sounds and musical possibilities. To kick things off, we will explore bending techniques from each note sounded on the 6th string.

The first note of the scale, the open low E, is one not often used for bending, but it is a great note to sound with a bend by pushing down on the string behind the nut, as demonstrated in FIGURE 2. Tony Iommi kicked off the classic Black Sabbath song Iron Man in this way, and Jimi Hendrix and Jimmy Page are other legendary guitarists who have often incorporated behind- the-nut string bends into their solos.

If we play E minor pentatonic in open position, as shown in FIGURE 3, we can bend the minor 3rd, the open G string, up a half step to the major 3rd, G#, and add vibrato by pushing the string down behind the nut, akin to what Hendrix did in Hear My Train a Comin'. FIGURES 4 and 5 offer more Hendrix-inspired examples.

In bars 1 and 2 of FIGURE 6, we move up to the minor 3rd, G, and experiment with bending it a half step and a whole step, adding finger vibrato each time. In bar 3, the bends are extended to one and one half steps, and to two whole steps in bar 4.