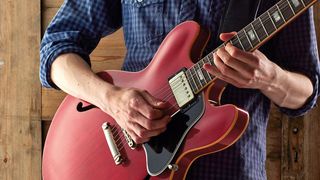 The scales used most often for soloing in blues-influenced music are minor and major pentatonic. As its name implies, a pentatonic scale consists of five tones, as penta means 'five' and tonic means 'tone'.

I play in a variety of bands that perform the music of the Allman Brothers Band, and I toured with Dickey Betts for 12 years, and when soloing over every one of those ABB songs, such as Blue Sky, Melissa or Whipping Post, I’ve found that these are the scales that work best as a foundation for embellishment.

Let’s begin with the G minor pentatonic scale (G Bb C D F), illustrated in FIGURE 1. In terms of intervals, or scale degrees, it’s spelled 1 b3 4 5 b7. The term 'flat' and its musical symbol b are often used to indicate what is technically a minor interval, such as a minor third or seventh (b3 or b7), as well as a diminished fifth (b5), even though the note name itself may not have 'flat' in it. Take notice of the sound and quality of the minor third, Bb. It’s a very expressive note, one that’s often emphasized in blues solos.

A great improvisational device, one that has been used by all the great blues and blues-rock guitarists, from BB, Freddie and Albert King to T-Bone Walker and Buddy Guy, to Jimi Hendrix, Jeff Beck and Stevie Ray Vaughan, is to bend the minor third up a half step to the major third. In the key of G, this means bending Bb up to B natural, as demonstrated in FIGURE 2.

The reason the major third sounds good in most blues songs is that they’re played in major keys, utilizing dominant seven chords (1 3 5 b7). For example, a standard I-IV-V (one-four-five) blues in the key of G is built from the chords G7, C7 and D7.

When we substitute the major third for the minor third in G minor pentatonic, all of the notes for the dominant-seven I chord are sounded; for G7, that would be G B D F. Bending the minor third up to the major third is a staple of the blues sound, as exemplified in the classic Howlin’ Wolf tune I Ain’t Superstitious. FIGURE 3 offers an example in that style.

If we replace all of the Bb notes in G minor pentatonic with B natural, we get what’s called G dominant pentatonic, as illustrated in FIGURE 4, which is another very useful scale for soloing. FIGURE 5 offers a solo over the first six bars of a slow 12-bar blues in G, with emphasis placed on sounding the major third within the minor pentatonic phrases. Once you have a handle on this approach, try incorporating this minor-to-major move into your own blues-based leads.

Guitar World Associate Editor Andy Aledort is recognized worldwide for his vast contributions to guitar instruction, via his many best-selling instructional DVDs, transcription books and online lessons. You can contact Andy at andyaledort.com.