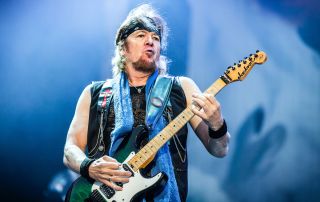 Iron Maiden’s Adrian Smith recently sat down with Chris Jericho for an appearance on the Fozzy front man’s Talk is Jericho podcast.

Among the many topics they hit on was the electric guitar player's return to Iron Maiden in 1999 after ten years away, a move that transformed the band into a three-guitar lineup, with Smith joining up alongside Dave Murray and the man who had initially replaced him, Janick Gers.

As for why the three-guitar approach worked at the time, and continues to work to this day, Smith said:

“Well, put it this way – if you had three Yngwie Malmsteens in the band or three Ritchie Blackmores, it would have been a fight after about five minutes. But because Dave’s one of my oldest friends – we've worked together for years – we know the score.

As for Gers, he continued, “Janick’s a lovely guy. But I have to say you know Jan wasn't going to change what he was going to play. He's very set in his ways. I sensed that immediately, so I started looking at different ways of doing things.

“I'd been playing with a drop-D tuning in Bruce's [singer Bruce Dickinson, who rejoined Maiden at the same time as Smith] band, I was somewhat used to that,” he said. “So when I first joined up [with Maiden in 1999], we played Wrathchild, I played it in drop-D tuning. Run to the Hills was in D, so again, I tuned it down. It gave it a slightly different sound. I was bringing that in, playing lower octaves on the harmonies and stuff like that.

“So I played a lot of stuff totally different to what I did when I was in the band before, which is quite interesting."

Earlier in the interview, Smith joked about the idea of making Maiden into a three-guitar band, saying, “Steve [Harris, bass] does come out with some wacky ideas that at first you think are not going to work. So he suggested to the guys, 'Why don't we have three guitars?' You can imagine what the room was like when he said that. Probably Dave and Janick looked at each other like ‘What? Lynyrd Maiden?’

"But I joined up, and we went up to Portugal to write some songs, and I had the song Wicker Man. I had the riff for that and someone said, ‘Does anyone have any new ideas?’ And so I started playing that, and away we went. And we never looked back, really."

For more Maiden goodness, check out our rundown of the Irons' 50 greatest songs.