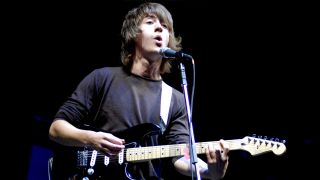 The electric guitar belonging to the Arctic Monkeys frontman was used for many of the UK indie band's early performances.

The Crowdfunder raffle - to which 14,410 tickets were sold over a two-week period - raised money for The Leadmill, a Sheffield venue in which Turner played the guitar, as well as several other independent venues across the UK that have been hit hard financially by the COVID-19 pandemic. A minimum donation of £5 was required to purchase a ticket.

The Leadmill has hosted some huge names over the years, including Coldplay, Oasis, Pulp, The White Stripes, Muse and The Stone Roses.

While the odds of winning the guitar were small, each entrant was granted access to a special screening of the band's 2006 Reading Festival performance.

It comes after the UK government last week announced £3.36 million in grants to 135 independent music venues at risk of closure.