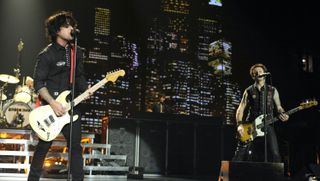 The Strat, which can be seen in many photos and videos from the period, features an alder body and maple neck and has been modded to include a Seymour Duncan JB SH4 in the bridge position, with the single coils in the neck and middle positions disconnected based on Armstrong’s preference.

There’s also a sticker emblazoned with wings and the words “Class of 13” under the bridge, as well as significant buckle rash on the back and wear on lower bout where Armstrong’s, um, arm, hits the body.

If this is a bit out of your price range, Armstrong's 1970 Martin D-41, also used on the 21st Century Breakdown tour, is available as well.

The dreadnought boasts a solid spruce top, solid rosewood back and sides and abalone inlays and also comes with a case and certificate of authenticity. This one will only set you back £11,999 (approx. $16,000).

For more information, head to Vintage and Rare.