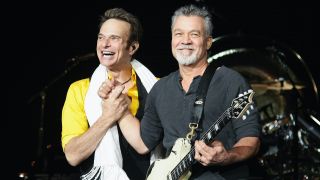 David Lee Roth recently declared Van Halen “finished,” and now in a new interview with the New York Times that focused primary on the COVID-themed art he’s been producing since the pandemic took hold, the singer expounded yet again on the band's future.

When asked if Van Halen will ever tour again, Roth said:

“I don’t know that Eddie [Van Halen] is ever really going to rally for the rigors of the road again. I don’t even want to say I’ve waited - I’ve supported for five years. Because what I do is physical as well as musical and spiritual - you can’t take five years off from the ring. But I did. And I do not regret a second of it.”

Roth continued, “He’s a band mate. We had a colleague down. And he’s down now for enough time that I don’t know that he’s going to be coming back out on the road. You want to hear the classics? You’re talking to him.”

Towards the end of 2019, reports were circling that Eddie Van Halen was undergoing throat cancer treatment. He had previously battled the disease in the early-2000s, before getting the all-clear in 2002.

Elsewhere in the interview, Roth discussed having had his recent solo tour with Kiss canceled when the music industry – and the world at large – went into lockdown mode.

“Every Jiu-Jitsu magazine has a 28-year-old who’s going to tell you about the two years that got taken away by his elbow,” he said. “Every kickboxing magazine has a 32-year-old instructor who goes, ‘Well, I lost those three years to my left knee.’ So I’ve just been isolating away.”

As for when he’ll be back onstage?

“In terms of what I really do for a living, as soon as the B-list - that’s Beyoncé, Bono and Bruce [Springsteen] - say it’s OK, I’ll be back singing and dancing and selling you T-shirts,” he promised.