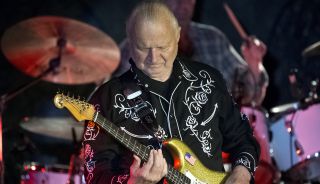 Dick Dale, known as the "King of the Surf Guitar," has died at the age of 81. The legendary guitarist's death was confirmed by his live bassist, Sam Bolle.

Born Richard Monsour in Boston in 1937 to a Lebanese father and Polish mother, Dale grew up listening to both Middle Eastern and Eastern European folk music, both of which had a tremendous impact on his eventual playing style.

After moving with his family to Southern California in 1954, Dale developed a passion for both surfing and playing the guitar. His twin hobbies culminated in regular, well-attended performances at the Rendezvous Ballroom and the recording—in 1961—of "Let's Go Trippin,'" generally regarded to be the first-ever surf-rock instrumental.

With his blistering take on the traditional Middle Eastern song, "Miserlou," and his 1962 debut album, Surfers’ Choice, Dale laid the instrumental groundwork that groups like—most prominently—The Beach Boys would use to anchor their own surf-influenced pop, and turn the initially local fad into a national one.

Though Dale was dropped by Capitol in 1965 following the British Invasion, he remained a huge influence in the development of the electric guitar through his close relationship with Leo Fender, who engineered progressively louder and higher-powered amplifiers to satisfy Dale's needs.

Though he retired from music in the Seventies and engaged in a low-key comeback in the Eighties, Dale returned to the spotlight when, in 1994, Quentin Tarantino chose "Miserlou" as the theme music for his iconic film, Pulp Fiction.

In a 2015 interview with the Pittsburgh City Paper, Dale detailed his extensive health issues, saying “I can’t stop touring because I will die... Physically and literally, I will die.” He went on to say that the medical supplies he needed to remain alive costed over $3,000 a month, and kept him on the road consistently despite near-debilitating health problems.

“When I go on stage, I’m in pain every night," Dale said in 2015. "But through the martial arts, I’ve learned to guide and deal with pain. I play harder now than I ever have, and honestly when I go on stage I push a button. I swear at the pain. ‘Get out of my damn body; I’ve got to do a job!’”