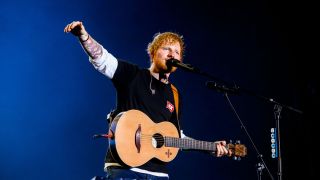 There is no artist quote so synonymous with the loop pedal as Ed Sheeran, yet the much-lauded UK singer-songwriter has announced plans to abandon the setup he used to single-handedly perform his record-breaking tours.

Closing the final night of his 260-gig Divide tour at Ipswich’s Chantry Park, Sheeran told fans, “This might be the last loop pedal gig,” according to the BBC.

Guess you’ve got to try something new after charting up the most-attended and highest-grossing tour of all time - especially when you don’t have to share the profits with any other musicians.

It looks certain that the chart-topping 28-year-old will take a considerable break from music, telling the crowd, “See you in two years.”

Perhaps those years will be spent building acoustic guitar brand Sheeran by Lowden, which Ed surprise-launched at NAMM in January.

Up until now, Sheeran has relied on a custom looper pedal dubbed Chewie 2, which was designed with his tech Trevor Dawkins, and boasts an internal Boss RC-20 Loop Station, as well as integration with looping plugin Mobius.

You can see it in action in a clip from the Today show below.