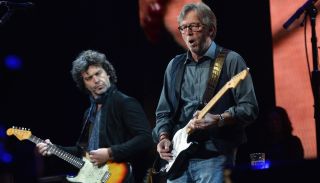 Eric Clapton has announced the fifth installment of his Crossroads Guitar Festival.

Set to take place at the American Airlines Center in Dallas from September 20-21, the festival will gather together a jaw-dropping list of blues-guitar greats for two nights of music. All proceeds from the event will go towards The Crossroads Centre in Antigua, a substance-abuse rehabilitation facility founded by Clapton.

For more info on the festival, head on over to crossroadsguitarfestival.com.